How to Scrimshaw Parts 1&2 with Gaetan Beauchamp

From the Archives: Gaetan Beauchamp – Knifemaker and Scrimshander

For years now the Spyderco Para 3 has remained one of the best EDC folding knives you can buy today. And in its Lightweight configuration you can get all the ergonomic cutting power without too much added heft in your pockets. As an exclusive collaboration with BladeHQ, the Para 3 Lightweight gets a fresh new mint green handle and a premium M4 steel blade. It’s a great choice if you’re looking for a distinctive everyday carry knife that looks as striking as its ability to cut for you day in and day out no matter what task you throw in front of it.

I have a non-lightweight PM 3 and am fairly fond of it. Still, The Native family is my favorite Spydie grouping. 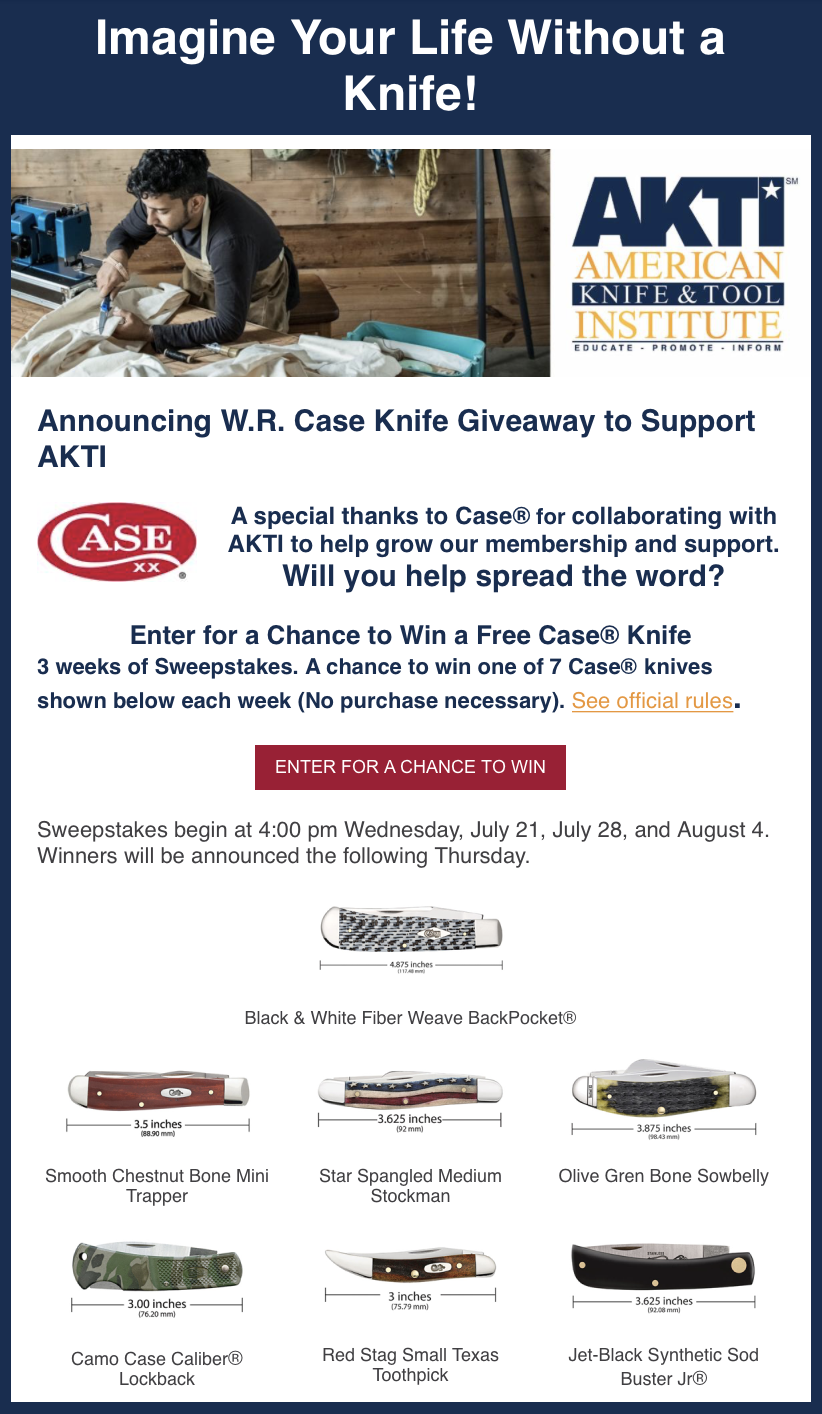 WOOX is making a splash in the outdoors community with products developed in the USA and made in Italy. Adding to their growing line of products—and reputation—they recently announced the release of the Leggenda folding EDC knife.

The handle of the Leggenda come in two different finishes—walnut and walnut/carbon fiber—giving it a classy look. The 3.5-inch blade features a slight drop point that is almost imperceptible in photos, almost resembling a Puukko profile. The knife comes to a handy 8.25-inch overall length when open.

The Italians continue to impress.

The next knife up for release from Civivi is the company’s latest collaboration with Ferrum Forge Knife Works, called the Stylum. The Stylum has the hallmark Ferrum Forge characteristics, and also marks the debut of a new steel for a Civivi flipper.

It can be hard to stand out in the knife world with subtle knife designs, but Ferrum Forge has managed to do it over and over again; the blades coming from brothers Chris and Elliot Williamson manage to be both simple and distinct, and the Stylum follows in that, um, style. Its low-slung drop point blade brings to mind other Ferrum Forge favorites like the Gent – and, at 2.96 inches in length, it falls into the same EDC category as that highly successful knife.

I realize how far the ultra-stainless steels have come, but not being around saltwater myself, I haven’t looked at them as carry options for myself.

52100 is by no means a recent steel — this steel has been in the market since 1919, which makes it one of the oldest steels still going by the same name. As a high-carbon, low-alloy steel, 52100 is different from most knife steels and offers different capabilities and properties.

In this article, we’ll get into everything you need to know about 52100 steel, with a special focus on what sets it apart from other steels, and how it performs when molded into a knife. 52100 has some unique properties due to its chemical composition, so it’s worth understanding the nitty-gritties of 52100’s production as well.

The properties of this knife can be perfect for someone with very specific requirements, so we’ll get into these details as well. We’ll also recommend some of the best 52100 steel knives in the market, carefully chosen through our vetting process — so make sure you stick to the end of this article!

July 25, 2021: When I last reflected on the founding of Knife Rights, it was the tenth anniversary of the Wall Street Journal article that inspired me to form an advocacy organization for knife owners (see below). Now, another five years have passed and it is 15 years since that fateful day. It doesn’t quite seem like yesterday, but it also doesn’t seem like it’s been 15 years—a decade and a half! Time passes quickly when you are having fun…and kicking butt!

The author of that article can’t have foreseen all that would come as a result of that article. He clearly intended to initiate the demonization of “tactical knives” in the same manner as he and others had been demonizing and attacking so-called “assault rifles,” aiming for bans and restrictions. Not such a far-fetched idea when you consider that the opening salvo to demonize switchblades in the 1950s, resulting in the Federal Switchblade Act and multiple state bans and restrictions, began with a similarly overwrought, sensationalist and fact-challenged article, “The Toy That Kills,” in the widely read and respected Woman’s Home Companion magazine.

It not all been fun and games, and that’s to be expected when you are working to repeal laws that have been on the books for decades, or in some cases, for over 100 years. Back in 2006 I coined the trademark slogan “A Sharper Future™” to encapsulate the ultimate goal of the organization. Despite the many naysayers and many obstacles, that “sharper future” I promised has become a reality. Knife Rights’ efforts have resulted in 34 bills enacted repealing knife bans in 23 states and over 150 cities and towns, most with bipartisan support. We have also been responsible for stopping nine anti-knife bills. You can add in a number of litigation victories as well to that tally. View Knife Rights’ accomplishments at www.kniferights.org/about/accomplishments/

No matter how much passion I had, we could not have accomplished anything without the support of so many good people and businesses that share my vision to rewrite knife law in America. Thank you so much for your generous support. Together we are making that vision of a Sharper Future™ a reality.
I also could never have done this at all without the support of my wife, Sue. She deserves as much credit for our success as anyone.

July 25, 2016: Knife Rights was born ten years ago today after I read an outrageous and highly inflammatory article headlining the Wall Street Journal, entitled “How New, Deadly Pocketknives Became a $1 Billion Business” demonizing so-called “tactical knives.” A discredit to the Journal, the overwrought and sensationalist article was filled with distortions, misrepresentations, innuendo, outright lies and cherry-picked quotes pushing a transparent rabid anti-weapon and anti-freedom agenda. But, the story didn’t quite spark the anti-knife response the reporter probably hoped for — in fact, it had precisely the opposite effect.

One wonders what the editors were thinking when they chose to illustrate that fateful article with their poster child for evil and dangerous “tactical knives” – a diminutive Buck Knives “Metro” lock-blade keychain folding knife / bottle opener with a 1.125-inch one-hand opening blade. In any case, it demonstrates the absurd idiocy of assigning malevolence to an inanimate object based on physical characteristics. No knife is inherently “deadly” — that’s an irrational and nonsensical label.

A cornerstone of Knife Rights’ principles is that inanimate objects like knives must be used by someone against another in order to become deadly weapons. Even then, often they are used for self-defense, not offensively. Knives are simply essential everyday tools used by millions of Americans at home, at work and at play and occasionally they are “arms” used to protect a life. Removing knives from statutory lists of per se (intrinsically) “deadly weapons” is an ongoing goal of Knife Rights.

We formally founded Knife Rights in December of 2006, adopting the slogan “A Sharper Future™ as our objective. The foundation for Knife Rights was expressed as “Essential Tools – Essential Rights™.”

It took a few years to get our legs under us, but in 2009 Knife Rights provided the key grassroots knife owner’s component of a coalition of groups that opposed U.S. Customs’ efforts to redefine a switchblade to include these same one-hand opening knives. The end result was that Congress passed a fifth exception to the Federal Switchblade Act that protected one-hand opening and assisted-opening folding knives.

Springboarding off that success, in 2010 we began our efforts to rewrite knife law at the state level. Knife Rights passed the nation’s first ever outright repeal of a state knife ban (switchblades, dirks, daggers and stilettos) in New Hampshire and the nation’s first ever Knife Law Preemption bill in Arizona, ridding the state of its inconsistent patchwork of local knife restrictions. This proved all the naysayers wrong; those who said it couldn’t be done.

It was, indeed, possible to repeal switchblade and other knife bans. Having proved those defeatists wrong, we have never looked back. Since 2010 we have been going gangbusters, proving again and again that Knife Rights can do what was once though impossible.

Dove season is right around the corner…

If you ever meet Mikey Vellekamp, you’d say that he’s a mix between an absolute rocker and a mad scientist when it comes to knife design. Mikey is the type of maker who can come up with a design in his sleep, then casually throw it into a Blade Show contest and blow the competition away.

If you don’t believe me, look him up. He’s done this multiple times.

Mikey is that guy who has been around the knife industry block and walks with all of the industry big dogs, but you’d never know it. His long hair, cowboy hat and smiling charisma screams stoner, drinking buddy, that guy that you want to party with. His list of knife industry awards screams design genius that’s not to be f@cked with on any level.

Not only is Johhn Tsai a great writer, he is a designer for TOPS and other companies, and a Master martial artist. Son of a master as well. He knows his stuff. 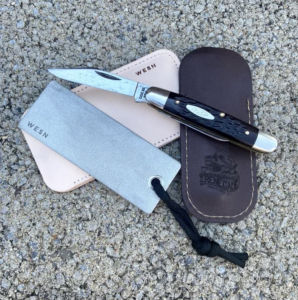 So, you’ve found your perfect knife (or, if you’re like me, your latest in a string of perfect knives) and you’ve put it to good use. The edge just doesn’t have that lightsaber sharpness anymore, and it’s in need of a thorough sharpening. Now you’re faced with a decision; should you have it professionally sharpened, or should you do it yourself?

The Knife Thoughts blog is every bit as good as their YouTube channel.

You have reached the end of the feed.