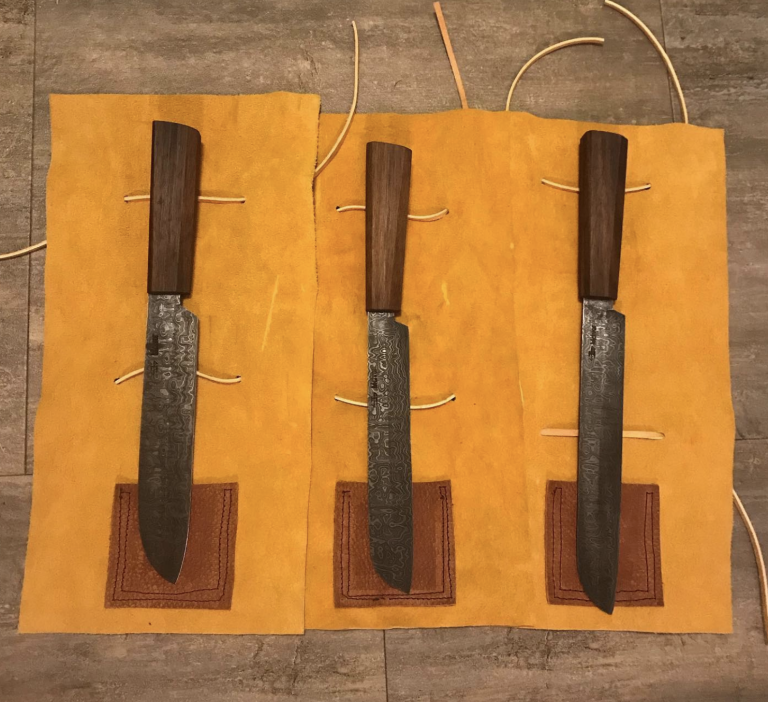 For those of you new to KnifeMagazine.com, 5 from the Grinder is our short format interview series with professional and “semi-pro” knifemakers. If you are interested in appearing on these digital pages and participating yourself, click here to find out how to be featured yourself.

Today’s featured maker is Patrick McIvor, of Dancing Scot Forge, a full-service blacksmithing shop in British Columbia. I will have to ask Del Corsi (see Del’s 5ftG here) if Patrick is one of the makers that he sent our way. 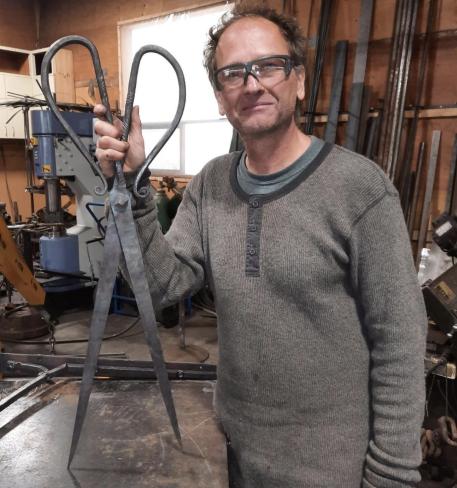 I’m the owner operator of Dancing Scot Forge located in Falkland, British Columbia, Canada.
My original interest in making knives began as a child. I ground a few simple blades out of scrap materials but was not successful in any way.
In my teens I was able to purchase a book by Jim Hrisoulas called the Complete Blade Smith in 1986.
Where I went to school, they had a forge anvil and a few tools. I showed my book and received permission to make a few blades and axes using traditional techniques.
I did not get into the forging of metals until I joined a group called the Kootenay Blacksmiths association that had members in BC, Alberta and the northern states.
Here is where I learned more about traditional blacksmithing. I dabbled in blades but was also working on becoming a more rounded traditional blacksmith that was able to make anything.
After a number of years self directed studies I decided to travel and learn from more experienced smiths. In 2007-2008 I traveled in Europe studying all aspects of blacksmith techniques including knife design and Damascus forging techniques.
I have taught many aspects of simple traditional blacksmith techniques which also includes knife, axe and Damascus forging. 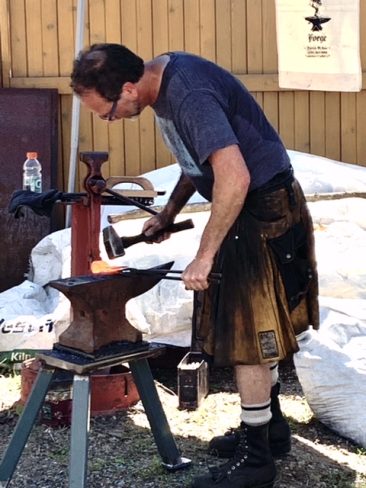 What knifemaker(s) or designer(s) have had the biggest influence on you? Do you have any mentors?

I am honestly all over the map in style and design. Mostly people come to me and say they want a certain type of knife or sword and I then put my own touches and influence in the blades.
The majority of my time studying in Europe was with Alfred Habermann in Ybbsitz, Austria. With him I met many types of smiths who were able to share ideas, information and techniques/technology. 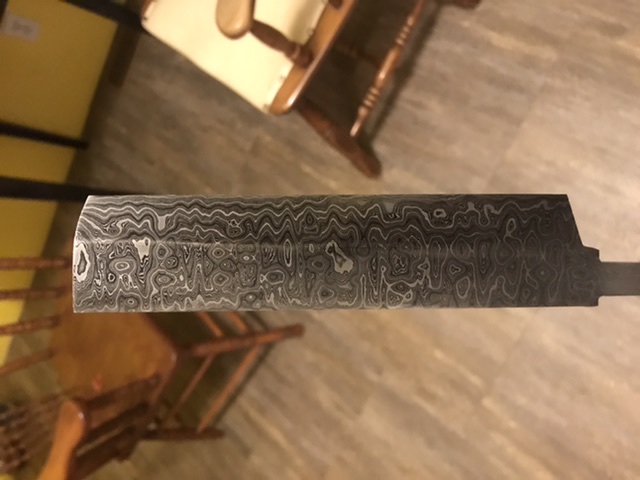 What is your favorite knife pattern or style from history?

My personal favorite styles are the Scottish basket hilt broadsword, dirk and Sgian-dubh. But I dabble in many forms and shapes of blades depending on the request. 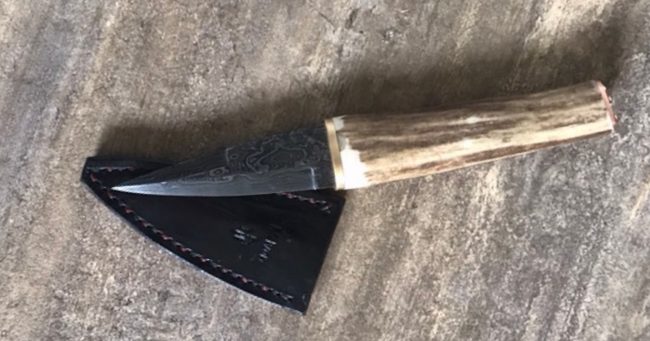 What is the next big thing in knifemaking? / What direction do you see the industry going?

There seems to be a growing interest in all things hand made. There is a growing number of clients who are asking for kitchen, eating and camping sets 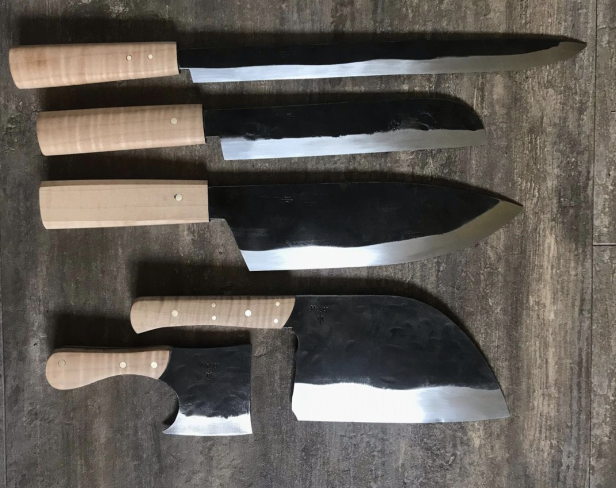 Is there a knife from your lineup that you feel best exhibits who you are as a knifemaker/designer in terms of design elements, aesthetic or techniques used?

Each new blade I make is a touch better than the last. I am getting an increase in requests for pattern welded blades of many styles. 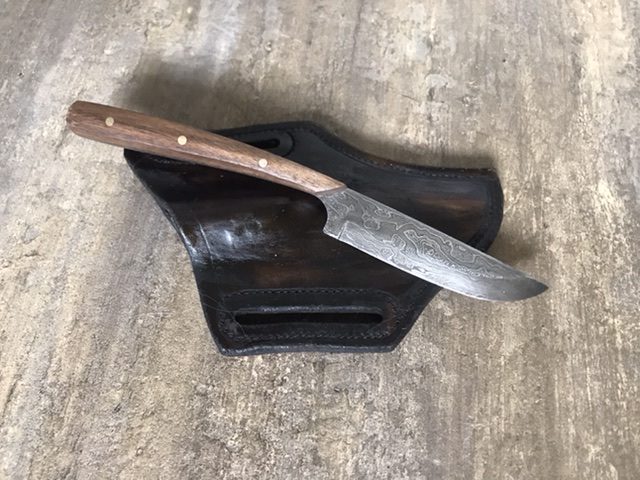 What is your EDC and why?

I carry mainly a Swiss Army knife because it has many tools that I’m using on a daily basis. But I do carry a medium sized Damascus hunting knife when I’m involved in a demonstration or market to show off a blade I have made for myself or a larger brooks style blade when trekking alone in the local forest around my home. 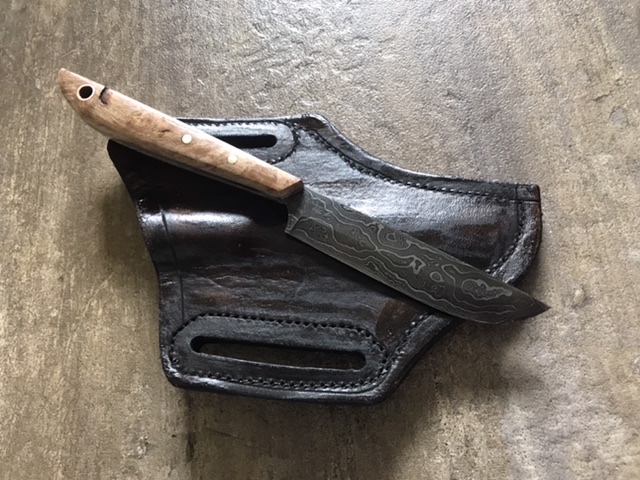 He can be reached via email: patmcivor (at) yahoo.ca

Once again, if you are a maker and would like to featured in a future edition of 5 from the Grinder, visit the link below.

Want to be featured on KNIFEMagazine.com? Participate in our “5 from the Grinder” series