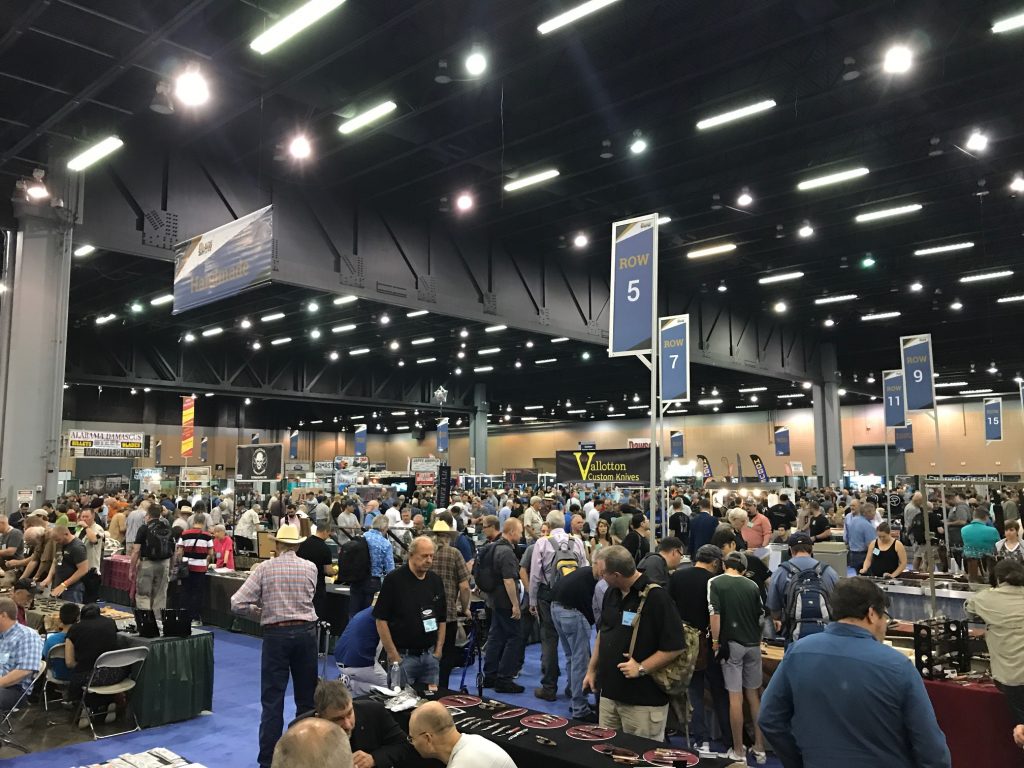 Howdy folks. I say “Friday Roundup” instead of “Day 1” since we have been here since yesterday. It is my 6th show, but the first time I have attended as an Editor at Knife Magazine. It is my first time attending as an exhibitor as opposed to simply showing up and beginning to walk around. For one thing, there was a booth to set up (#47 – stop by and say hi if you are at the show)

I pulled in as set up was getting started. Nothing terribly exciting to describe, but at the end of the day we were making decent progress.

While I did run into several people I knew, and visited for a few minutes here and there, it was a time for work for all involved.

After a harried check in at the hotel and a quick shower, it was off to the Custom Knife Collector’s Association Banquet. Finally a time to relax a bit and strike up a leisurely conversation for the first time. Strangely,  there were few people I knew in the room. But everyone knows Mark. Mark was at an ABS Board meeting if I recall correctly, and I was there to represent the magazine.

I met many folks who have known Mark for decades, including a couple of whom have done some writing for the print version of Knife Magazine. I had an interesting conversation with Dan Peterson who wrote the article on Vitreous Enameling in the December 2018 article in Knife Magazine.

Doug Ritter of Knife Rights gave a brief update on the NYC situation , and I was given a minute or two talk about the website and the Knifemaker Database and Directory in particular. All knifemakers are invited to see if they are included in the list, and either update their info or submit an new entry.

I then headed back to the hotel and got to work.

Instead of rolling in for the first time at noon Friday as in years past, I was there bright and early helping set up the rest of the booth, which I am embarrassed to I forgot to snap a picture of today. That will be remedied Saturday.

I accomplished quite a lot today, but it isn’t necessarily suited to a narrative format. I did a lot of stopping by booths thanking production companies for their generous donations to our 100 knives in 100 Days Giveaway. I stopped by many tables of custom makers and explained the database and directory to them as well.

The day ended at the AKTI Free to Carry benefit, where the biggest news was knifemaker Lucas Burnley’s knife and knuckler combo which blew past its pre-auction estimate and raised a whopping $6500 for AKTI’s legislative efforts.

I am going finish this post with just a fairly large photo gallery of some of the highlights.

I had a sit down with Jim O’Young, designer of the original SpeedTech Synergy, and the new WE Knife Co. Synergy 2. I am working on a print article on this very innovative folder with a great backstory.

I met Gaétan Beauchamp. Remember he will be at our booth (#47) at 4pm Saturday to draw the winner of the knife he donated to our 100 Knives in 100 Days Giveaway.

For more details on how to win this knife, click below:

100 Knives in 100 Days Giveaway: Gaétan Beauchamp knife to be raffled at BLADE Show

Julio Diez is a California maker who has recently had a couple of his designs picked up by Condor. He had a knife with a handle of “forest floor micarta”, literally moss and debris from the woods, fused in resin. He didn’t make that handle material himself, but it looks awesome adorning one of his hand made knives.

French maker Patrick Famin is probably best know as the designer of the Benchmade 380 Aller, a production version of his popular micro-folder. He has a prototype for a new “Frenchie EDC” which is a tactical art-knife with a trapdoor in the handle hiding a corkscrew. 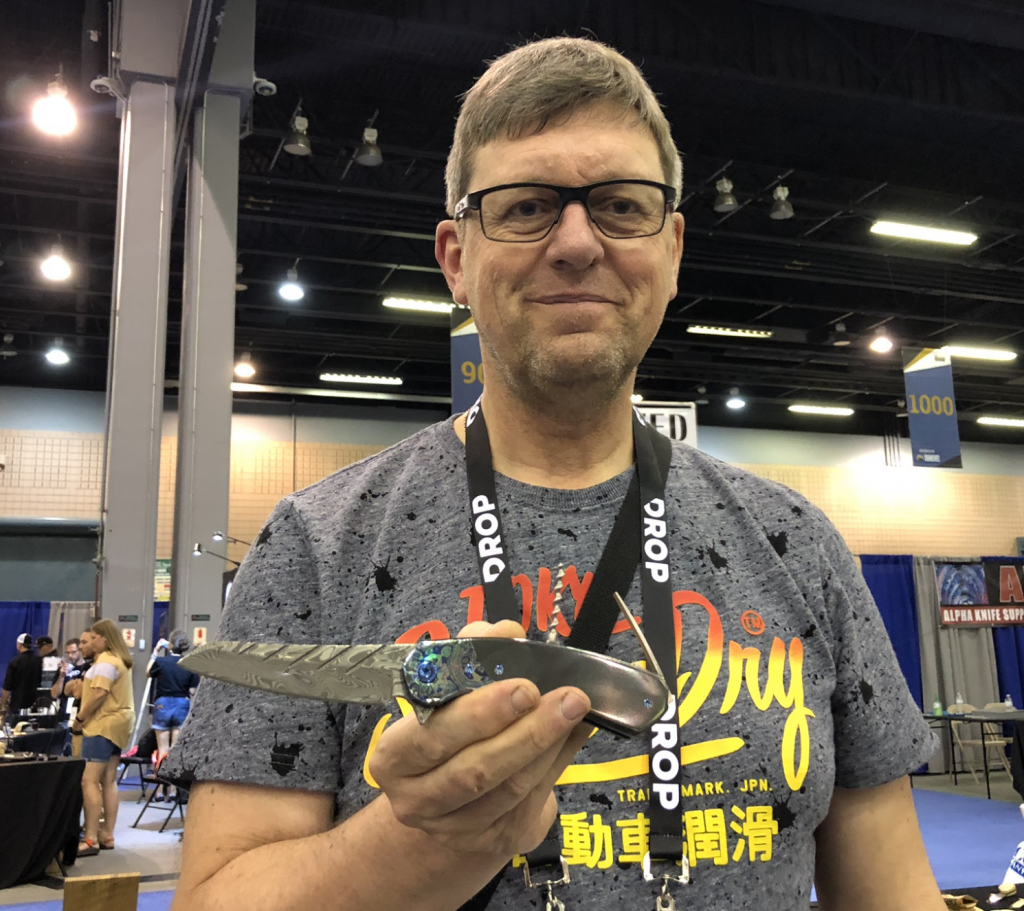 It is worth noting that while they have always produced their fixed blades in-house, they had previously OEM’ed their folders to a Chinese manufacturer. This new flipping EDC cleaver is now being produced at their plant in Pakistan. Seems like a solid knife.  I’d carry it.

Stephan Fowler is always fun to talk to. And his beard is better than mine.

Ben Peterson of BladeHQ was my first industry contact and has become one of my favorite people in the industry.

Condor’s Joe Flowers is another public face in the industry that I don’t think presumptuous to call a friend. After all, the night I met him at BLADE Show 2015, he ended up riding back from dinner in the trunk of my wife’s Saab.

These last few photos are a bit of a lark. When I started attending BLADE Show I was a tad starstruck. Every time I see these 3 gentlemen at an industry function, I make a point of getting a picture. I am no longer starstruck, but in the case of Dave Canterbury and Robert Young Pelton it has become a running joke that I do so.

Ok, I am still a little starstruck when it comes to Ken Onion.

Finally, while I have never spent time in “The Pit”, I always need to get back to my room and write at night, I did shoot this video on my way out of the AKTI benefit, so you all could see the social hub of BLADE Show.

“The Pit” at the Waverly Hotel. The social hub of @blade_show. This is my 6th Show, and I am still yet to be able to spend any time here. I have to go back to the room to write. #bladeshow2019 #knifestagram #knifenation #knifeworld #knifecommunity #idratherbedrinking

Have a great Saturday everyone. Be sure to come by and visit us at Booth 47 if you are at the Show.

Southbound and Down, Blade Show Bound