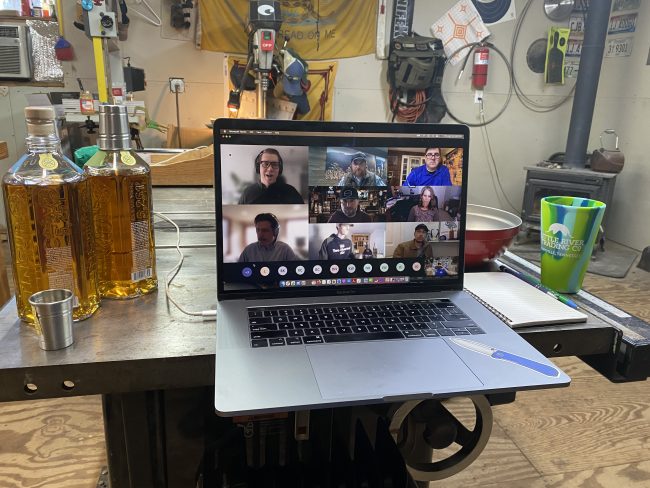 The cancellation of SHOT Show has forced companies to get creative with their 2021 new product reveals. None have done so as well as Gerber, Gerber partnered with Tin Cup Whiskey for an online reveal and whiskey tasting. I mentioned this in my weekend Open Thread. This post will be both a recap of the meeting, and a brief introduction to the lineup.

As I mentioned, two bottles of Tin Cup Whiskey arrived last week, one “American Whiskey” and a bottle of Rye. There is also supposed to be a package of sample knives, but these are stuck in USPS limbo. I was set up and ready to go when meeting time arrived. 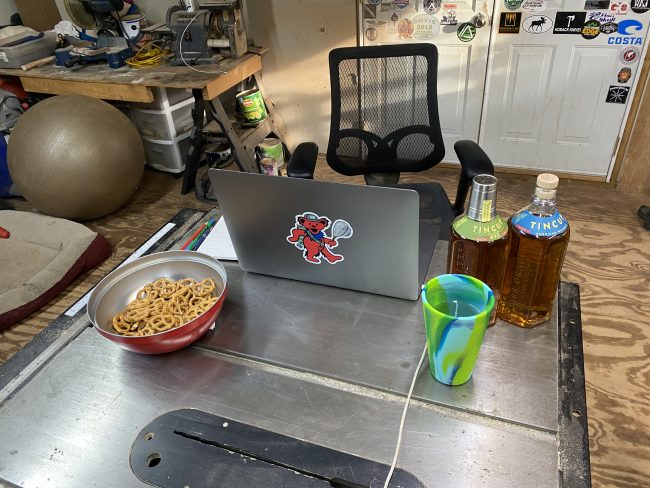 The Gerber portion of the meeting was conducted by Seth Jaramus, who walked us through each of the new items. 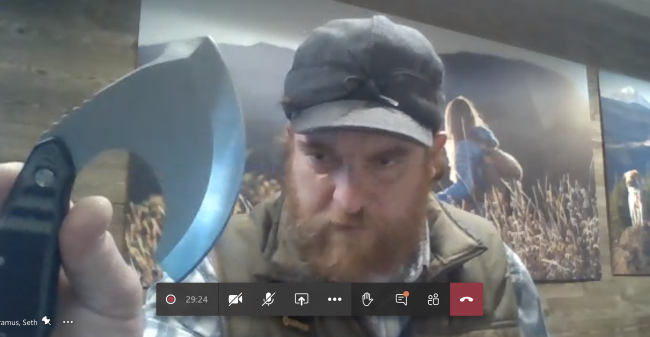 There were about 20 other people invited to the meeting, though I did not recognize their names. The Ulu Skinner (MSRP $49.99) seemed to generate the most buzz among the group, which is one of three new hunting knives in Gerber’s Downwind Series.

The Drop Point ($39.99) looks solid, and the Caper ($34.99) would make a good EDC fixed blade. All three come with waxed canvas “tin-cloth” sheaths, which have a great look to them. 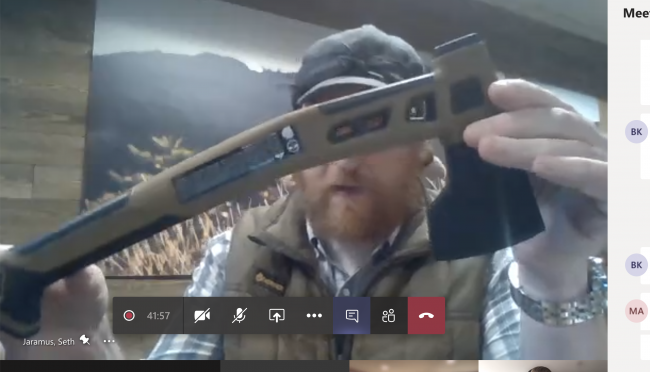 Sticking with the outdoor theme are a pair a Bushcraft axes, one full sized (79.99) and one hatchet ($59.99). The handles are overmolded polymer which is already found in parent company Fiskar’s outdoor tool lineup – including some well regarded axes.In the photo above you can see where the head makes a right hand turn, forming a “tang” of sorts. This forms a protective steel zone where an overstrike will not damage the handle. 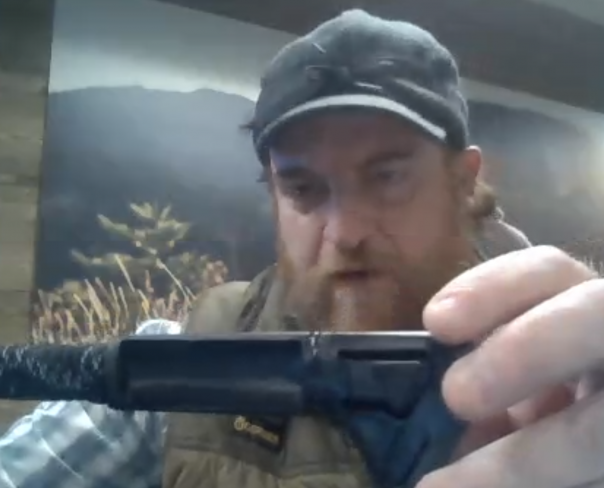 The polymer handle, in addition to being more durable than wood, has a hollow portion hiding a slide-out tray reveling a single (hatchet) or double (full) compartment large enough to hold a Bic lighter and firestarter, or whatever one wishes to stash. An emergency section of Paracord comes wrapped on the remainder of the slide out, and the whole unit snaps into the pommel of the axe.

On the EDC front, there are 4 new knives, and 4 new bladed multitools. 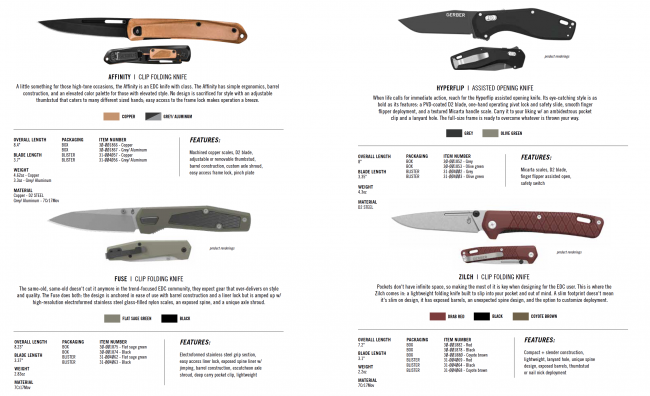 The Affinity is the dressiest of the lot, with copper ($45.99) or aluminum scales ($34.99) with an elegant look about it. The Fuse ($29.99) has a slim profile and an elecroformed textured plat inserted in the handle for grip and contrasting aesthetic. The Hyperflip ($59.99) is a burly, G10/D2 workhorse, and the Zilch ($19.99) is an ultralight EDC geared towards those who wish to maximize their minimalism.

There are also two new bladed multitools for those who don’t need a burly plier-based model for their everyday life.

The Armbar Slim ($30) is available in Cut model with a usefully large pair of scissors, and the Drive model with a 14″ driver bit socket. 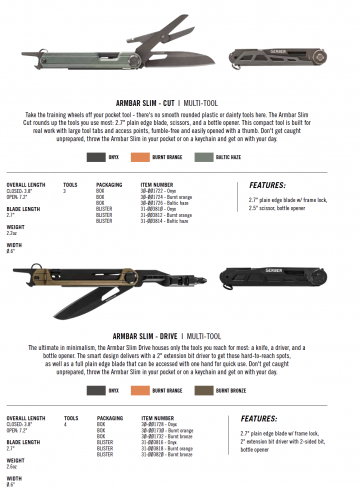 The Lockdown ($47) comes in a Pry model, and the Drive comes with as the name suggests, a 1/4″ drive socket. In addition to their liner lock blades, there is a second blade – a replaceable Exacto #8 for fine detail work,  standard on both models. 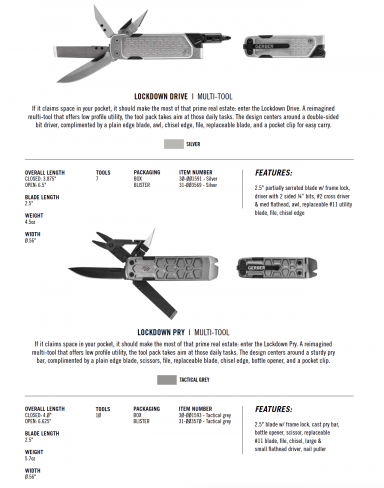 Finally, the meeting wrapped up with a Tin Cup Whiskey tasting hosted by company founder Jess Graber. Tin Cup “American Whiskey” is distilled with Colorado water, and contains a touch of Rye with the Corn mash, and a bit of the distillery’s “American Single Malt” barley whisky blended in for depth of flavor. 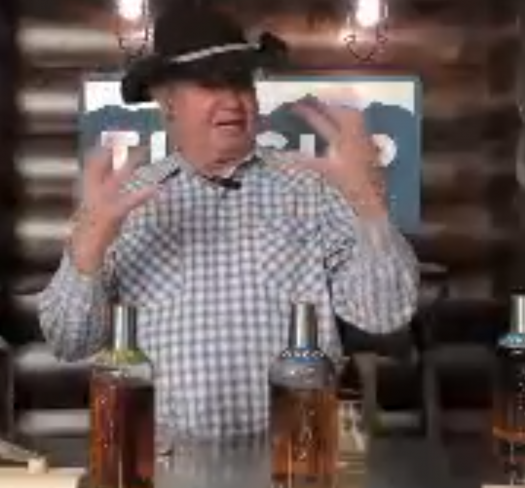 The rye is distilled in Indiana, but is cut with Rocky Mountain water and bottled in Denver. It has a spicier taste, but still remains smooth on the swallow. I was impressed by both.

More information on the 2021 Gerber releases can be found here. 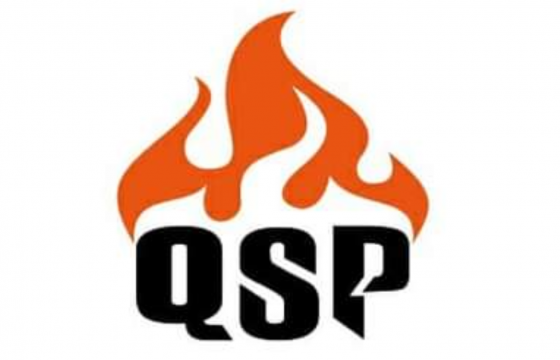 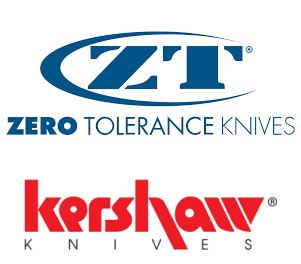 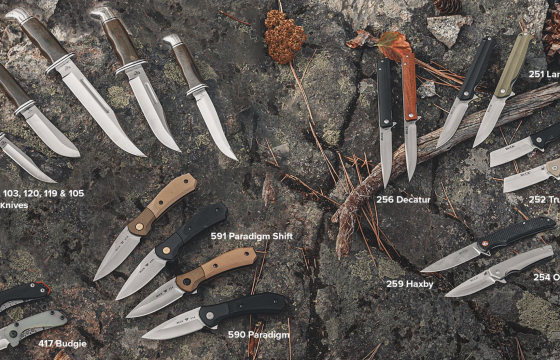