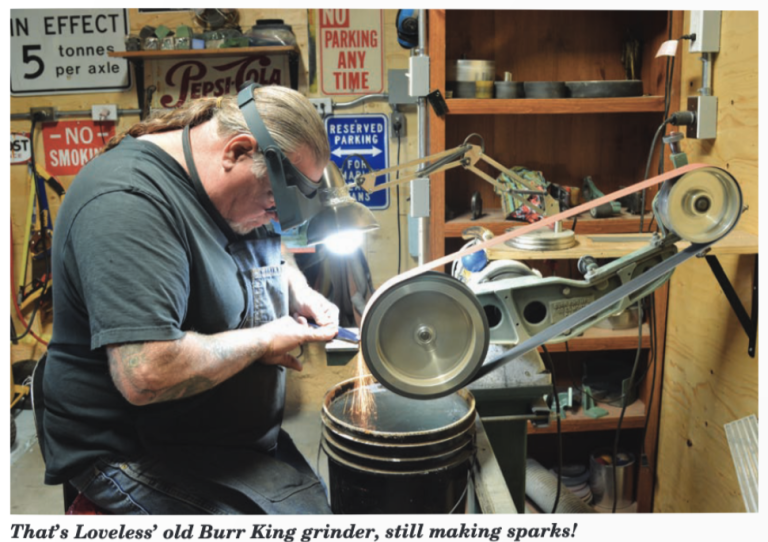 Editor’s Note: This is an extended free preview from our August 2022 issue. Premium Online Members can read the whole thing here. Not an Online Premium Member? It is just $19.99/yr, or just $9.97/yr for existing print subscribers. Click here to sign up today.

John Wilson was born in Kitchener, Ontario, Canada. He has lived in several areas across Canada and the U.S., but what makes his knifemaking story especially interesting is that he lived in Riverside, California for 18 years. At that time John was employed with Unit Industries working on a Swiss screw machine in Fullerton, California. A life changing experience came when the head of this machine needed rebuilding. The company flew a machinist in from Switzerland, and John helped him rebuild the equipment. While talking during a break one day, the machinist happened to mention that there was a world renowned knifemaker living really close to John’s home in Riverside.
The idea that someone made knives by hand intrigued Wilson, he began to search the local phone book for that very famous name, the legendary Robert W. Loveless. John told me the following, “He was in the phone book [and] I realized he lived a half mile from me, I used to walk my dog Harley right past his house, small world! After finding his number I called, introducing myself, [and] asked if we could meet. Bob said, ‘Sure,’ and we set a date to meet.” 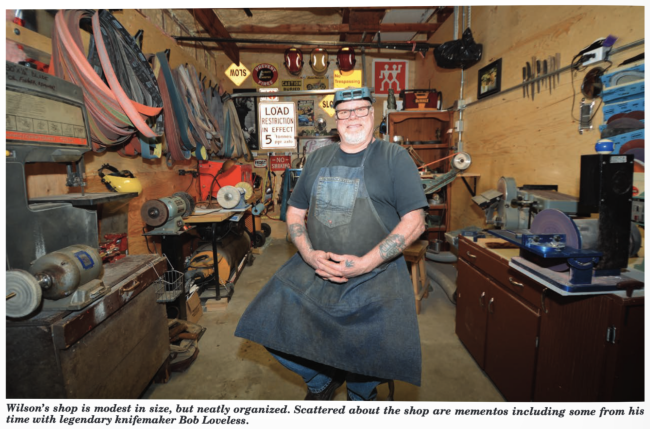 That first meeting with Bob Loveless was a real eye opener for Wilson, he got to see the Dropped Hunter, Big Bear, Semi-Skinner, and the New York Special Loveless models. John said, “I was in awe and had no idea someone could make these by hand. They were beautiful and perfect, I wanted to make one, but had no idea how to start.” He was definitely in the right place to learn. Wilson immediately bought two books; How To Make Knives and Living On The Edge, both signed by RWL!
Over the next ten years John kept in touch with Bob, stopping by the Loveless shop a couple times each year. Armed with instructional books John began making his very first handmade knife. He would go into work early at Unit Industries and made the knife there. It took about three days to construct a very crude knife out of a saw blade, the handle was fabricated from an oak pallet found in the building. John gifted this first knife to his son who still has it. Etched on the blade is the inscription: “To my Son, Love Dad.”
Wilson ended up working in the Loveless shop for about two years, from January 2005 until the same month in 2007. While he had kept in touch for the ten years prior, it was mostly to stop by and visit. Little did he know that a life changing opportunity was headed his way. One day John was at a local barbershop waiting for a haircut. In walked Bob Loveless for the same reason. He sat down beside John and talked for about 15 minutes, then asked for Wilson’s phone number saying, “I am going to call you.” John said, “I was left wondering why this legend wanted to call me.” 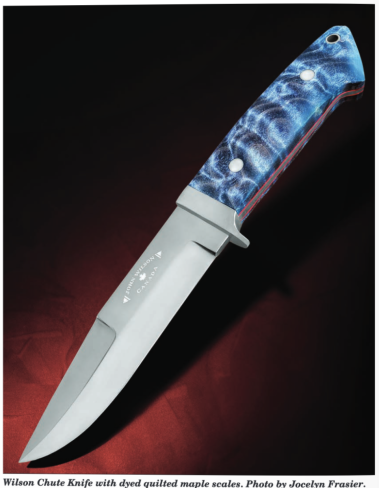 About a week later the phone rang, it was Loveless asking him to come down to the shop. John headed down right away. Upon entering the shop Bob immediately asked, “Would you mind coming down and working with Jim (Merritt) and I?” Wilson said yes, although he didn’t know who Jim was at the time. John’s duties would be to make sheaths and guards for hunting and fighting knives. “I was filled with excitement and started work the very next day,” John said.
What followed was an exhausting two-week training program learning all aspects and details of what it took to make a sheath “Bob’s way.” He elaborated; “You learned this very quick – there is a right way, a wrong way, and there is Bob’s way to do things. I did exactly that because I wanted to continue working there.” Wilson learned that Jim Merritt had been off work for some time to have surgery. Knife production had really fallen behind, most of the orders were for 400 knives destined for Japan. John mentioned that the Japanese market was very strong at this time, especially requests for models with stag handles and the nude Loveless logo.
Wilson’s responsibilities continued to grow during this time, “I was in charge of making the sheaths and guards, also etching the maker’s mark on the knives. Other duties included shopkeeper, yard duties, and errand runner, usually for treats and cigarettes. I had to mind the fridge and keep it well stocked with Diet Pepsi and root beer. After working in the shop for some time I began to notice that Bob was wanting to slow down, his interest leaned more toward reading and watching movies.”
One day Bob approached John asking for help cleaning out and tearing down an old white storage shed in the back yard. They also did a thorough cleaning of the shop. John remembers being very surprised at the request; “This was not a regular occurrence; in fact, it was the only time we had deep cleaned the shop. They came across things Bob had packed away for years, the shop was stacked high with boxes of items. During the clean Bob came across the Knifemakers’ Guild medallion that he received at the 1994 Blade Show in Atlanta. He opened the box, looked at it and smiled, as if enjoying a pleasant and distant memory. Shutting the box, he looked at me and said, ‘Here, take this home for your collection.’ I could not believe he gave this to me; I had no idea how to react, but happily accepted the gift.” 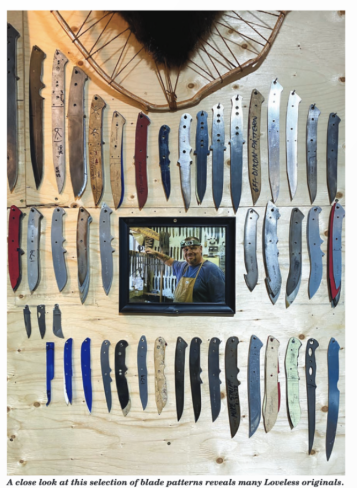 These details from John Wilson are a fascinating glimpse into what could be termed the end of an era, as Bob Loveless appeared to be winding down his own knifemaking duties. It seems like destiny that a chance meeting with a machinist led to John developing a close relationship with one of the greatest names in the knifemaking world. The knives, templates, and other belongings that were gifted to John during this period are mind boggling. Several knives from other knifemakers and knife companies were among the gifts.