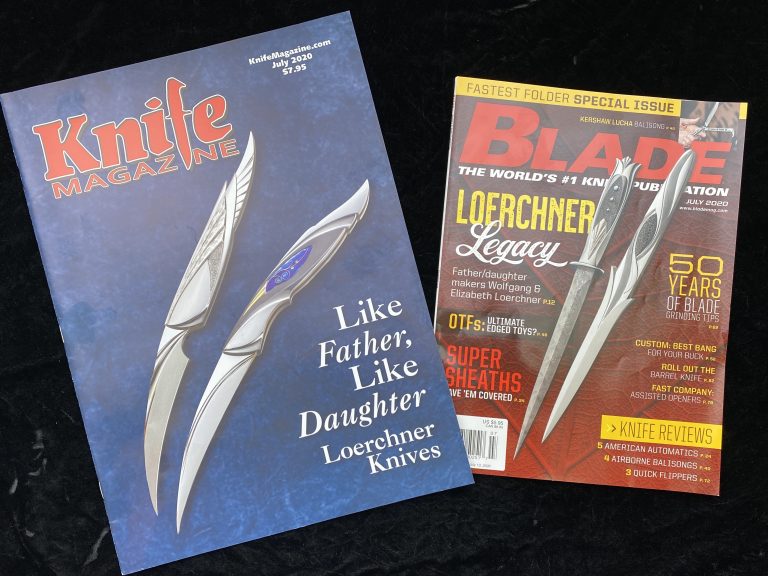 Knife Magazine vs. Blade – Compare and Contrast (Get a free issue of Knife)

Are you a BLADE Magazine subscriber who wants to compare for yourself? Take a picture of your mailing label from a recent copy of BLADE and send it to clay (at) knifemagazine. com. For a limited time will drop a recent issue in the mail and send it out to you. Just put “Sample Issue” in the subject line of your email.

So it has finally happened. After almost 45 years as the two most significant monthly publications in the knife industry, the cover features from both the July issue of Knife Magazine and Blade Magazine have overlapped. In this case both covers feature Father-Daughter knifemaking duo Wolfgang and Elizabeth Loerchner.

This rare occurrence, we think, presents an opportunity for those who don’t yet subscribe to KNIFE Magazine to see what makes KNIFE a unique publication – dedicated to serving the interests of the knife community. FOR A LIMITED TIME, EVERYONE WHO READS BLADE MAGAZINE (and everyone who doesn’t!) CAN READ OUR COVER ARTICLE, PLUS THREE MORE FROM THE CURRENT ISSUE, FREE!

This online sample can’t provide the experience of what it’s like to kick back with your favorite beverage and open the protective bag to release a fresh-from-the printers copy of a first-class, oversized, glossy knife magazine printed on heavy coated paper stock — but at least you can get an idea about what makes KNIFE Magazine different. 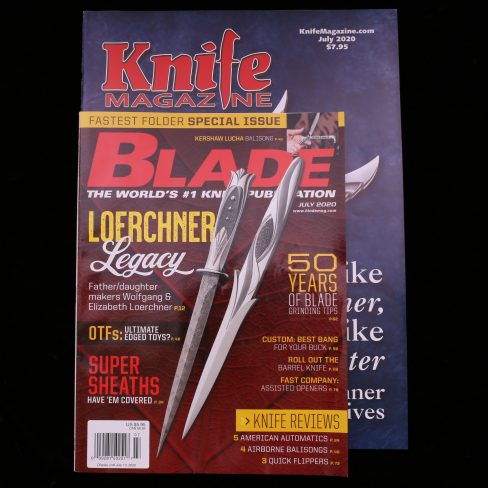 BIG Difference… literally! KNIFE Magazine is printed in a large format, 50% bigger than BLADE — that means BIG photos and more readable text, and our acid-free 50 lb. coated paper stock provides real heft and a luxurious feel — not to mention permanence. No ’tissue paper’ here! KNIFE Magazine is something you’ll want to display on your coffee table until the next issue comes, when the previous one can be added to your collection of issues neatly filed away for future reference.

Let’s compare the July covers.  I don’t think that I am biased when I state that the BLADE cover is a touch on the busy side — practically the entire table of contents is repeated there before your eyes, distracting you from the beauty of the cover knives expertly photographed by Jim “SharpbyCoop” Cooper. With little clutter competing for your attention, the KNIFE Magazine cover allows the essence of the makers’ creations to take center stage. 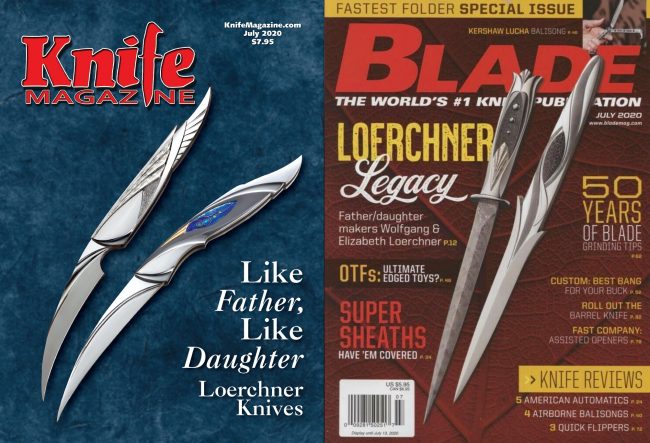 The cover story in BLADE is not actually about the Loerchners, it’s a Father’s Day piece about four knifemaking fathers who have imparted the craft to their progeny (Wolfgang and Elizabeth Loerchner, Jerry and Alex Hossom, Aaron Wilburn and his daughter Francesca Wilburn-Ritchie, and Harvey and Dillon Dean). Worthy subjects, every one — but you only get a few hundred words about each of them. 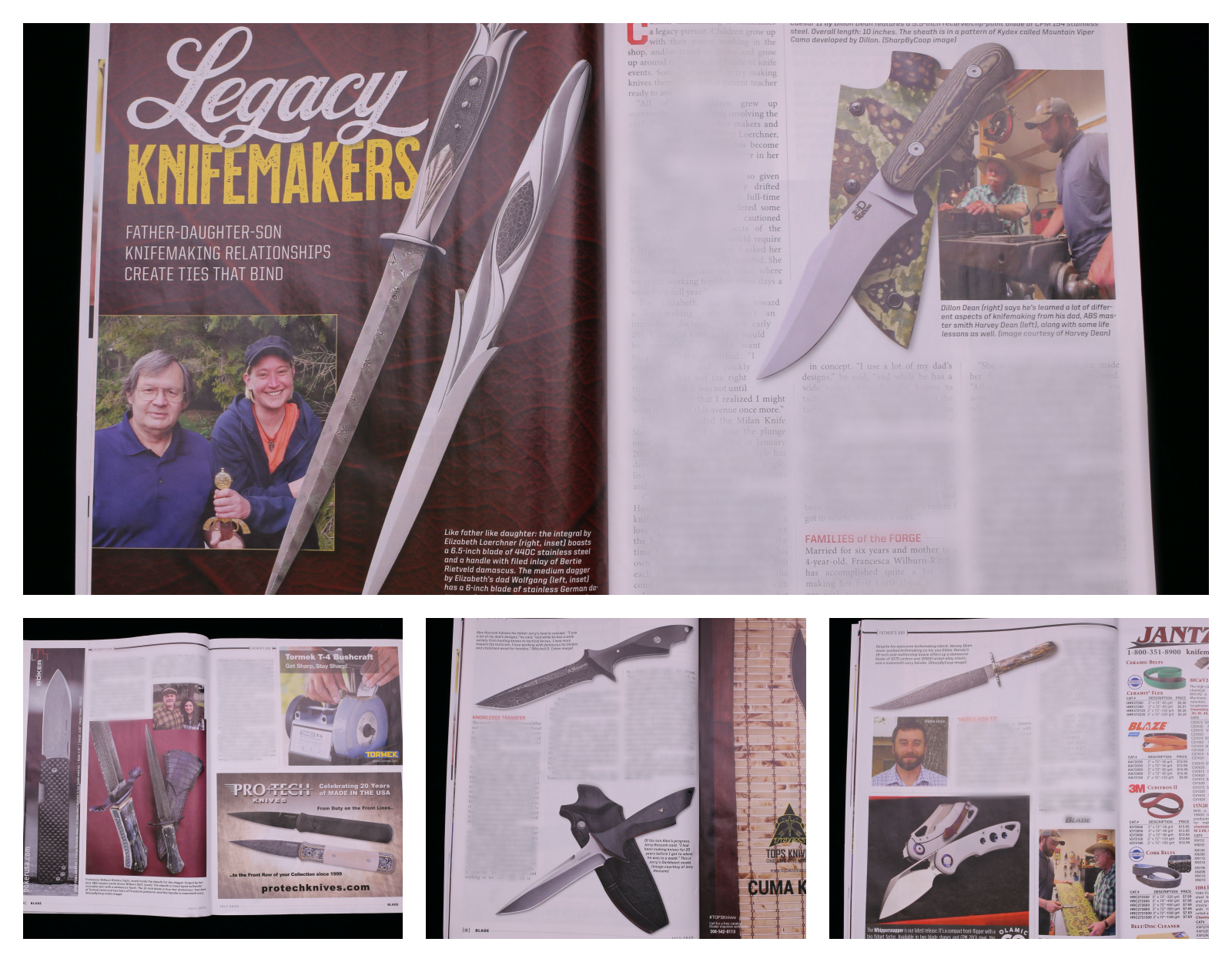 By contrast, the KNIFE Magazine article contains almost 2000 words and 13 large photos on the Loerchners and their work. Which of these might you go back and reread 5 years from now? 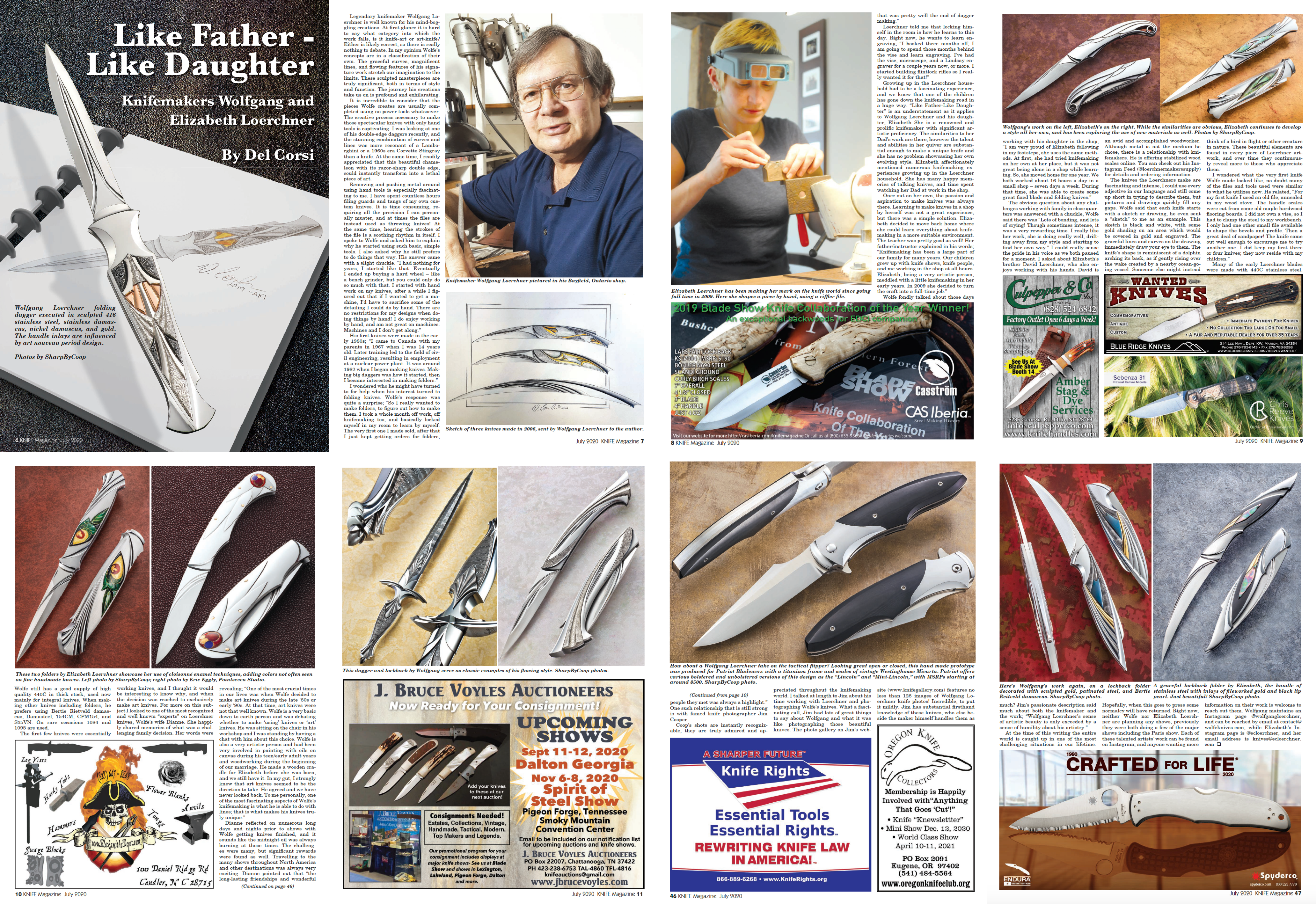 As you can see, KNIFE Magazine puts the “Cover” in “Cover Article”.

Our philosophy is that today’s world is overrun with tiny writeups and videos created for short attention spans — just turn on your computer and you’ll be overwhelmed with social media and other material “an inch deep and a mile wide.” KNIFE Magazine is an escape from that world — pull it out of the mailbox, rip open the protective bag and smell the fresh ink, then go find your favorite comfy chair and escape your frenzied life for a couple of hours. Dive into subjects you never knew existed, learn something new about familiar topics like the Loerchners, consider topics that make you think a little. This is what quality magazines are about; they encourage you to take a little time out for yourself and your favorite subjects, an EXPERIENCE that arrives in the mail once a month.

Even in the old black & white days, we constantly heard from readers the very same story: when the magazine arrived, the hassles of daily life were set to ‘pause’ as readers found their personal happy place in the pages of the magazine. We are still playing that role today, modern day attention spans be damned!

Check our masthead: contributing to KNIFE Magazine are three BLADE Magazine Cutlery Hall of Famers (Levine, Voyles, Hughes; the latter two are also ABS Hall of Famers), former editors of BLADE, KNIVES ILLUSTRATED and TACTICAL KNIVES (Voyles and Dick), and several other writers who have been recognized as experts for decades. We’ve got your street cred right here.

DIVERSITY OF COVERAGE: Both Knife and Blade cover the modern production and custom knifemaking worlds, but no magazine covers the depth of knife history as we do. Leveraging our writers’ decades of expertise, every issue of KNIFE Magazine takes the reader deep down a variety of rabbit holes.

For instance, each of Bernard Levine’s Whut Izzut? columns reads like an episode of History Detectives. J. Bruce Voyles’ Edgewi$e covers the world of high-end knife collecting, and is often a definitive reference on whatever topic he is covering that month. The connections which all of our writers have built over lifetimes in the industry translates to the most comprehensive coverage of all facets of the knife world.

This attention to the details is what truly sets Knife Magazine apart, whether it is a knifemaker feature like the article we are discussing today, or a history piece on a short-lived but influential maker or production company at the turn of the 20th Century. Knife Magazine has by far the most experienced and knowledgeable stable of writers of any publication in the industry.

Are you a BLADE Magazine subscriber who wants to compare for yourself? Take a picture of your mailing label from a recent copy of BLADE and send it to clay (at) knifemagazine. com. For a limited time will drop a recent issue in the mail and send it out to you. Just put “Sample Issue” in the subject line of your email.