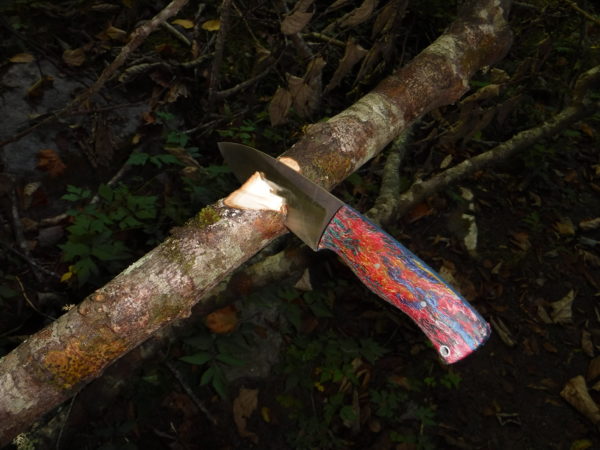 (Editor’s note: This post originally appeared at The Truth About Knives. Used with permission of the author.)

David has known “Big Chris” Berry for longer than I, and introduced us at last year’s BLADE Show. I immediately took a liking to his work, and that Sunday morning I plunked down full retail for a boning/filet knife which I got to name The SteelHead. A couple of months after the show he sent me a couple of loaner knives, a nice little paring-sized “Bird and Trout” knife, and a larger camp and kitchen blade, The Wolverine.

Blade: The Wolverine is my first experience with CPM 4v. According to the Zvisoft App, 4v has a higher wear and impact resistance than CPM-3v, which is itself fine knife steel. Chris warned me that the biggest downside to 4v is its tendency to stain. Throughout the course of testing, some staining developed but it was not a detriment to the blade. However, there was an instance where I must have not dried it thoroughly enough, and actual surface rust formed when the knife was left on the windowsill for a couple of days. It was at this point I hit it with the stropping wheel on my Tormek. The blade polished right up. No harm, no foul. Just something to be aware of. 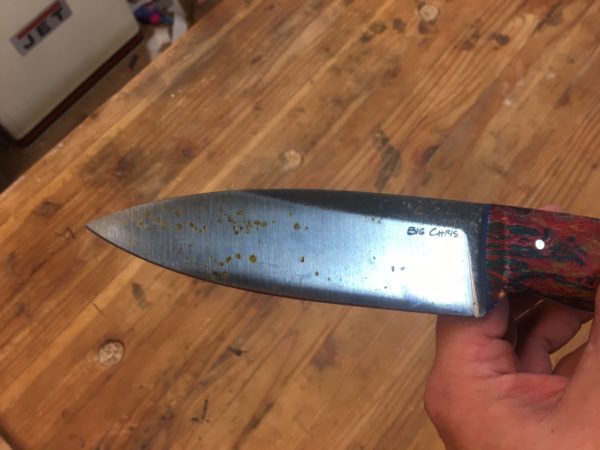 The blade itself is 5″ long with a full flat grind. It is noticeably thin for such a large knife, coming in at a whisker under 1/8″ on the spine. The grind and blade’s thinness give the Wolverine an exceptional slicing geometry. This thing cuts like no-one’s business. At the same time, it is not delicate at all despite its thinness. I was able to beat on it heartily while batoning, and despite its light weight, effectively chop through thin branches. No flex, bend, or noticeable damage.

Handle:Really one of the most unique features of the Wolverine, both aesthetically as well as functionally. It is big. As Ethan Becker said while examining the Wolverine, “People are either going to like or hate the size of this handle. I like it.” 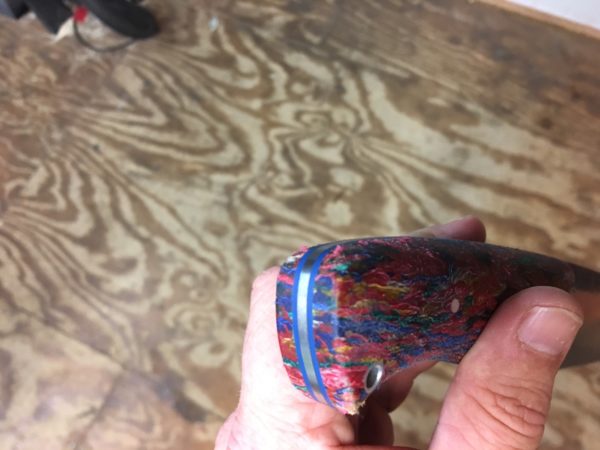 Notice the fraying on the handle

I like it too, and will go into greater detail in “Erogonmics”.

The handle has thin G10 inserts between the full-tang and the “micarta” scales. I put that in quotes because the material is an interesting composite made from resin and shredded polyester hammock. It is something Chris picked up a while back, as much for its unique appearance as anything. It is a comfortable material, slightly softer than typical micarta, but it has a unique property of “pilling” like a sweater. Small tufts of the shredded hammock expose themselves from the resin, giving the handle a slightly fuzzy texture. It isn’t extreme, but it is something you notice.

Of course Chris offers other handle options as well.

The scales are permanently affixed with 3 pins and a lanyard loop. 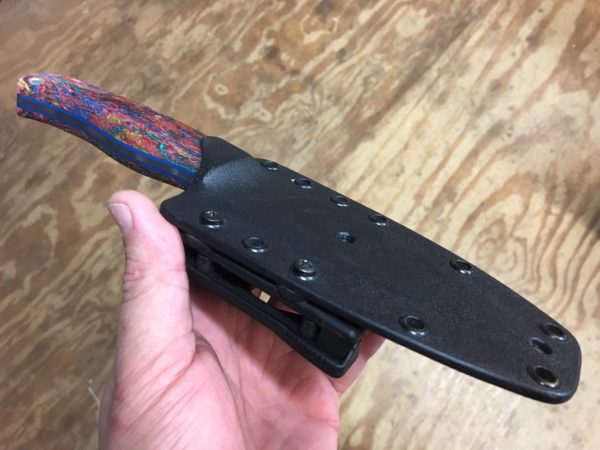 Sheath: A well built but otherwise unremarkable Kydex sheath. Pancake-style, not taco, so it is consequently fairly flat. Good retention. No “battle-rattle” and it takes significant effort to shake it free. A Teck-Lok buckle can be attached in varying orientations. 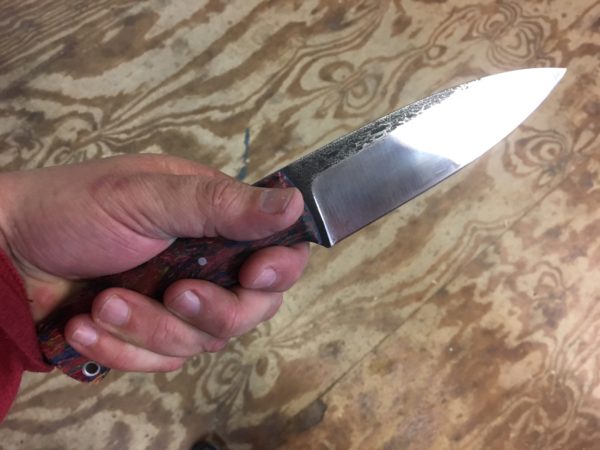 Egonomics: As I mentioned, the Wolverine has a very large handle in relation to most other knives. However, it never felt ungainly in my medium-sized hand. The contours matched my grip well, and the thicker size both prevented hand fatigue, but also gave enough confidence to swing the knife harder than average when chopping through wood. 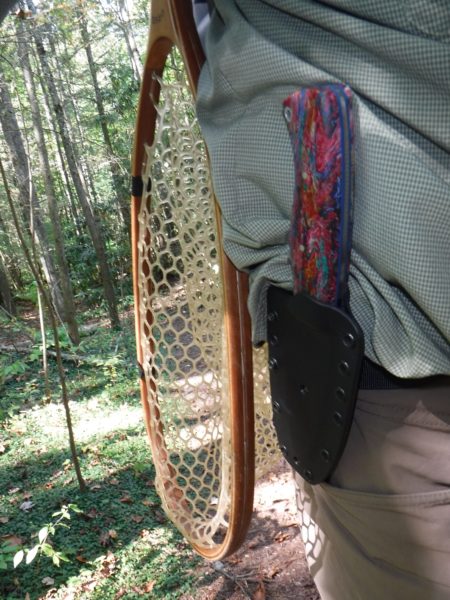 Carry: Chris didn’t include a Tek-Lok on the knife, I am not sure if it is included on a purchased knife. I had an extra and it bolted on just fine. I chose to carry it both reversed on my left hip and traditional right hip depending on my mood. It was my go-to knife for most of the second half of last year’s fishing-guide season. It rides fairly high on the hip, never causing an issue while entering or exiting a vehicle. The pommel also made a good handrest as I stood back and watched my clients fish. 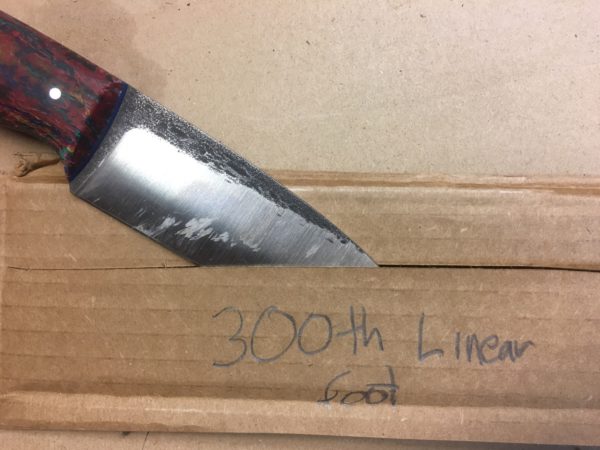 Unbelievably sharp and slicey. I keep harping on this, but the slicing properties of the blade geometry are fabulous. It zipped through newsprint like it wasn’t even there. It could slash clean through a 3/4″ manila rope, and most of the way through 1″. However, it was in cardboard-slicing that this knife excelled.

Typically I stop at around the 125 linear foot mark. By that point most blades have experienced a significant reduction in performance. Or they are so thick that it is a chore. Or my hand gives out from cramping. At any rate, I have never taken a knife out to 300 linear feet of cross-cut cardboard before, but it was over 200 feet before I noticed a drop-off in performance. I could still (barely) slice newsprint, but all it took was a little honing on the Tormek to restore the edge to arm shaving sharpness. I never actually needed to sharpen this knife throughout months of use.

This was seriously the most amazing cardboard-slicing knife I have ever tested. 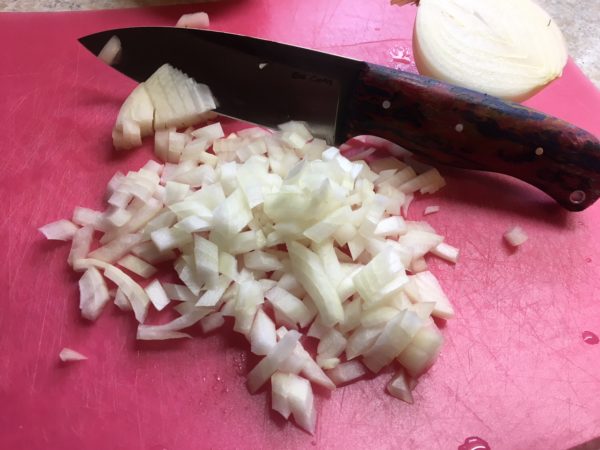 Chris told me going in that he likes the kitchen-manners of the Wolverine. Its gentle rocker and flat grind make for excellent cutting performance in all manner of foodstuffs. It dices onion like an actual kitchen knife. It peels and slices apples as well as any non-paring knife. 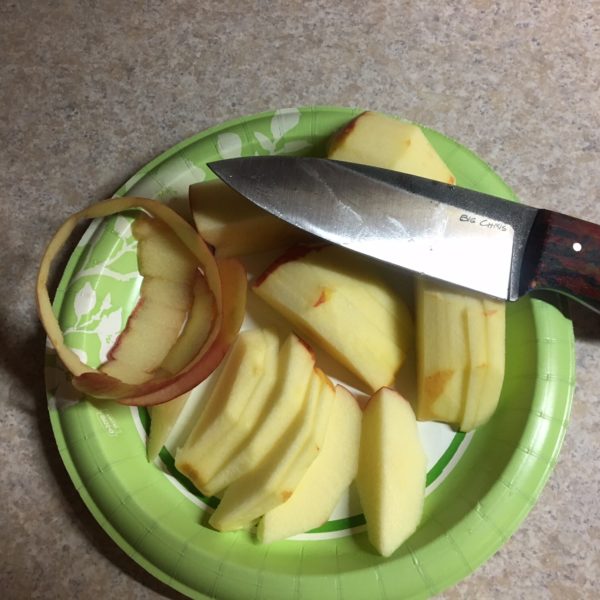 I also used the Wolverine as one of my Thanksgiving Turkey carving knives. The Wolverine proved nimble and effective in cutting up our holiday bird. 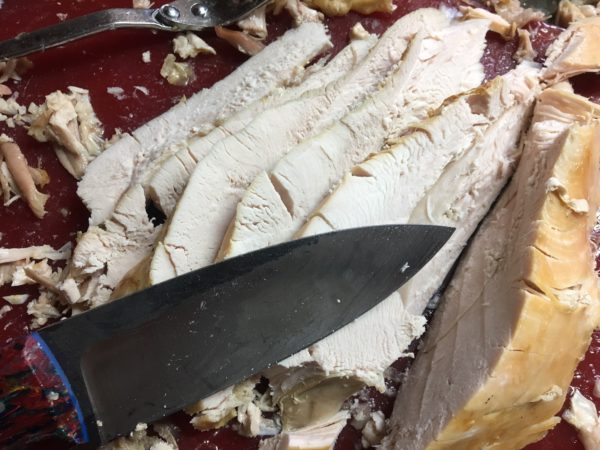 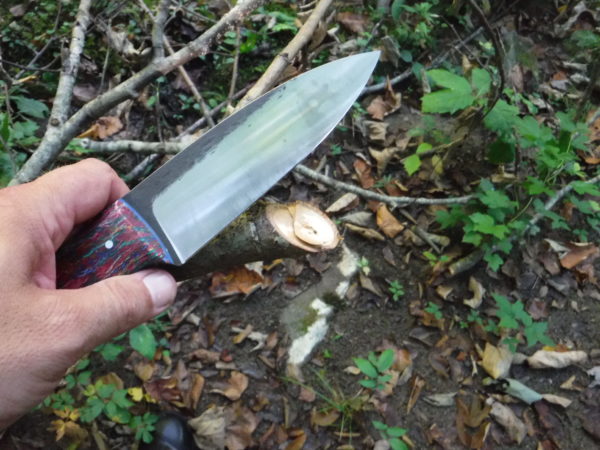 I have mentioned it before, but I frequently have to cut down limbs to retrieve my clients’ flies. Despite its light weight, the Wolverine can chop through 1″+ branches cleanly, and can hack through larger limbs with more effort.

Any knife I take into the backcountry while guiding needs to be able to cut staves for a stretcher or travois. I have confidence that the Wolverine can do just fine at this.

Batoning: The same characteristics that give the Wolverine such phenomenal slicing ability also are a bit of a hindrance in batoning. The thin blade and full grind cut rather than wedge the wood, and consequently it does not bust the wood apart efficiently. 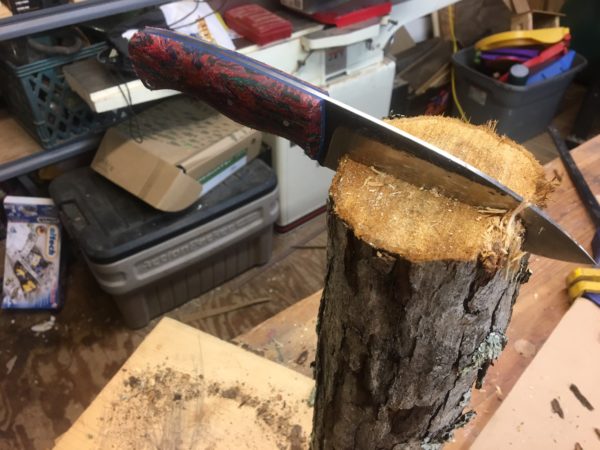 I got the knife jammed in the log above, the thin profile just didn’t pop-open the still-green oak.

If you are someone locked into wood, stag, or other natural handle materials, you won’t like this. I personally think it is funky and fun.

I am beginning to wonder if I will ever give a 5-star blade rating. This is as close as I have yet come. The staining and batoning performance combine to knock this down a fraction.

I beat on this blade and it took it in stride. No flex in the blade, despite its relative thinness. The 4v steel keeps a great edge through prolonged chopping and cutting. Slight ding on the handle “pilling” .

I really like this knife. It is a phenomenal slicer, passable light-chopper, and has a great feel and aesthetic. Chris wants this specific knife back for personal reasons, so it will be heading back to Kentucky soon. That said, a Wolverine or other similar Big Chris bush/camp knife is on my list if I have the opportunity to pick one up down the road. While I didn’t personally have a problem with the wear on the Wolverine’s handle, I would more highly recommend one with traditional micarta scales.

Either way, the Wolverine is a fine knife, and about the “sliciest” knife I have ever used.