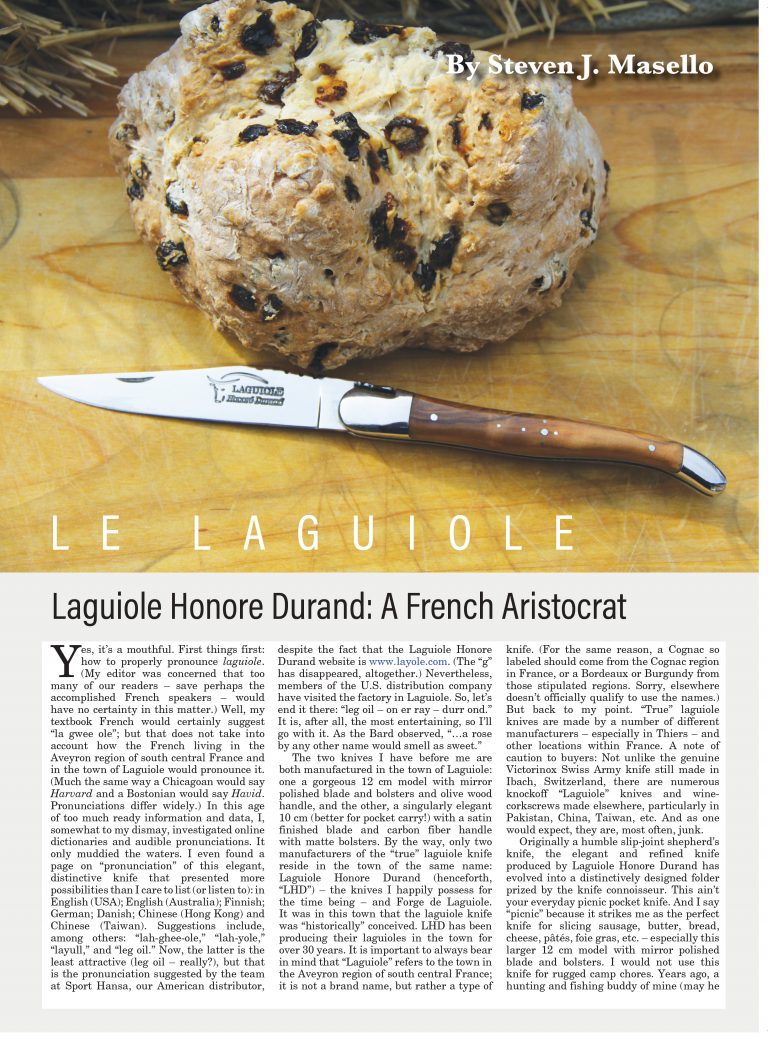 Yes, it’s a mouthful. First things first: how to properly pronounce laguiole. (My editor was concerned that too many of our readers – save perhaps the accomplished French speakers – would have no certainty in this matter.) Well, my textbook French would certainly suggest “la gwee ole”; but that does not take into account how the French living in the Aveyron region of south central France and in the town of Laguiole would pronounce it. (Much the same way a Chicagoan would say Harvard and a Bostonian would say Havid. Pronunciations differ widely.) In this age of too much ready information and data, I, somewhat to my dismay, investigated online dictionaries and audible pronunciations. It only muddied the waters. I even found a page on “pronunciation” of this elegant, distinctive knife that presented more possibilities than I care to list (or listen to): in English (USA); English (Australia); Finnish; German; Danish; Chinese (Hong Kong) and Chinese (Taiwan). Suggestions include, among others: “lah-ghee-ole,” “lah-yole,” “layull,” and “leg oil.” Now, the latter is the least attractive (leg oil – really?), but that is the pronunciation suggested by the team at Sport Hansa, our American distributor, despite the fact that the Laguiole Honore Durand website is www.layole.com. (The “g” has disappeared, altogether.) Nevertheless, members of the U.S. distribution company have visited the factory in Laguiole. So, let’s end it there: “leg oil on er ray Durand.” It is, after all, the most entertaining, so I’ll go with it. As the Bard observed, “…a rose by any other name would smell as sweet.”

This article first appeared in the August 2021 issue of Knife Magazine. Premium Online Members can read the whole thing by clicking the blue button below.