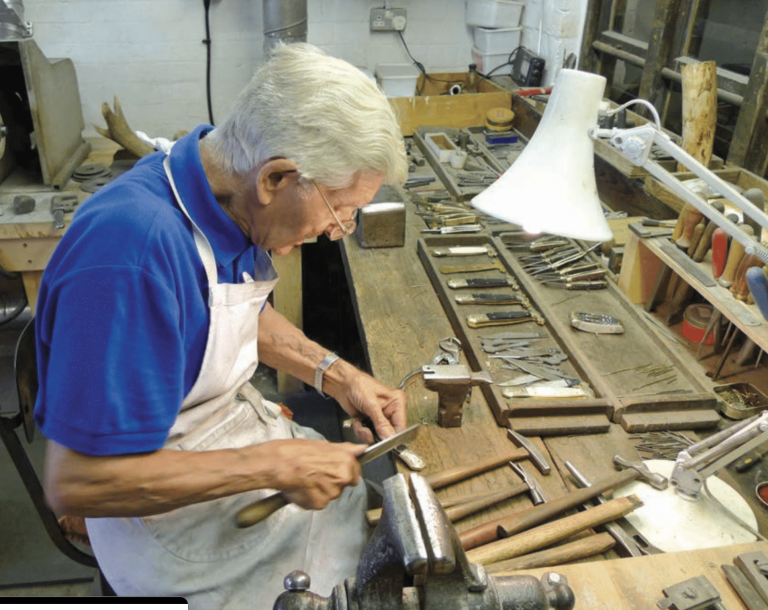 In our April 2021 issue we have an article by Geoffrey Tweedale, eulogizing and chronicling the life of Stan Shaw, preeminent Sheffield Cutler, who passed away at age 94. Premium Online Members can read the whole thing here.

Tweedale also wrote the official obituary for Shaw in the UK Guardian newspaper. 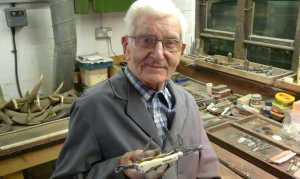 My friend Stan Shaw, who has died aged 94, was Sheffield’s pre-eminent pocket-knife maker, and his career spanned almost 80 years.

Born in Worrall, near Sheffield, Stan was the son of Walter Shaw, a ganister miner, and his wife, Amelia (nee Coldwell). His father died aged 45 from silicosis, leaving his mother to raise a family of nine. Stan’s childhood and education were further blighted by illness, which kept him in hospital for several years.

In 1941 he knocked on the door of the Sheffield cutlery firm Ibberson and asked for a job. Ibberson was one of the last manufacturers to support the old skills, and he was apprenticed to the Osborne brothers – Fred and Ted – whom he would later describe as “two of the best cutlers in Sheffield”. By 1954, when he married Rosemary Burgin, Stan had succeeded them as the company’s premier pocket-knife craftsman.

You can read the whole thing here, and I highly recommend it for anyone who can’t view our paywalled article. (Not a Premium Online Member? It is only $19.95/yr or $9.97/yr for Print Subscribers. Click here to sign up today.).

Also of interest are a couple of videos. In this first one from 1993, Stan makes a sleeveboard pen knife start-to-finish at his old shop.

This second video is a short interview from 2017, where Stan describes the life of a “Little Mester” and what makes a Sheffield knife special.

Stan Shaw was himself a piece of history, and his loss marks the end of a direct connection to the days when Sheffield was still a major world center of cutlery production. The knife world is poorer for it, but he leaves behind a legacy of knives that certainly ranks among the all-time most prolific makers in history.