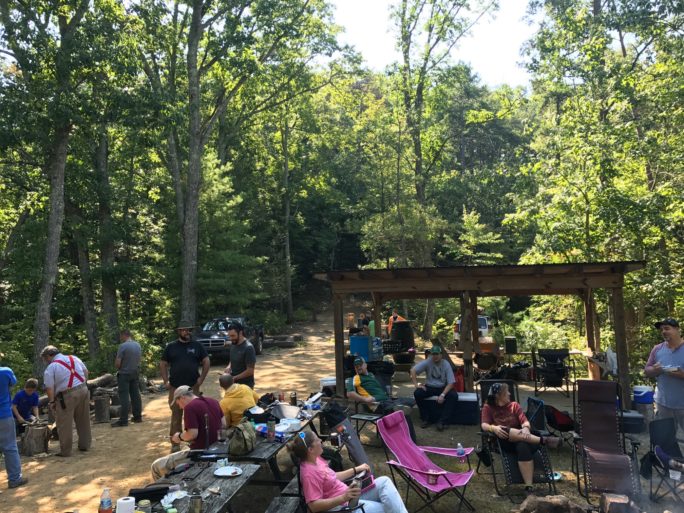 I capped off a whirlwind 27 hours or so at my first Beckerhead Gathering. David is still there tonight, along with most of the 2 dozen or so folks attending the biannual event at the home of Ethan Becker. I am sure he will have more coming up.

I’m back home tonight, so I am going to share some of what I saw and experienced. It was a wonderful immersion in a world of hard-core knife enthusiasts, and I had the chance to learn a lot from some experts in knives and bushcraft. And gorge on pork products. And shoot some stuff. And much, much, more.

I made the short drive down from Knoxville, arriving about 11am. People were still gathered at Ethan’s house, several of whom had spent the night Thursday. After a mingling a bit, we loaded several vehicles and Ethan’s Kubota and headed up the trail to the camp up on the ridge.

It is a no BS trail up. Dogwood Dan got his full sized pickup stuck, and it took several people the better part of an hour to get it out. This happened behind me, but I am sure someone got pictures. I will share them if I come across any. My Tacoma made it up without incident, and I set about putting up my tent.

My little corner of the mountaintop.

Apparently I am not one of the cool kids. I slept in my 18 year old Sierra Designs Comet. Most the majority of folks went the hammock and tarp route. Some of the arrangements were fairly impressive.

What happens at a Beckerhead Gathering? It is essentially a constant fission and fusion of small groups of people. One minute you will find yourself with one group of folks passing around a knife or two to examine…

Folks will split off to go test out a knife…

As I mentioned on Friday, one of my goals this week was to put the ESEE PR-4 in the hands of as many people as possible. I succeeded in this and have written evaluations from more than a dozen people to share in a later post.

Other times a small group would go to the far end of camp and do a little shooting. I had my Ruger 10/22 Takedown, there were various other rifles and handguns passed around. I even got to shoot a suppressed Kris Vector. 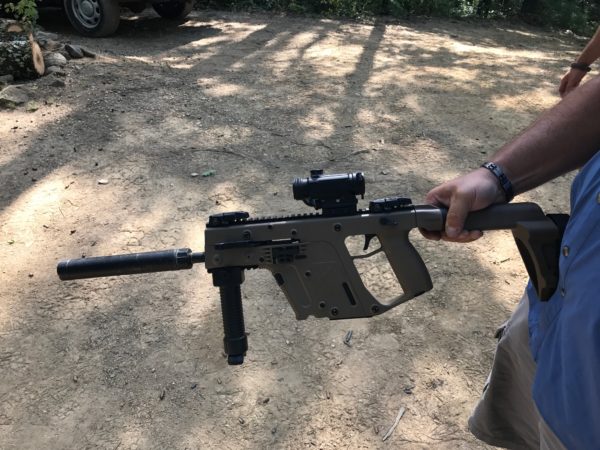 Speaking of 10/22’s there was a visitor to camp in the early afternoon. Someone chased it off with some very poor rifle fire. I don’t think they ever hit it.

There were times where people went off to demonstrate woodcraft techniques. I learned a couple of things that I plan on sharing in a post this week. 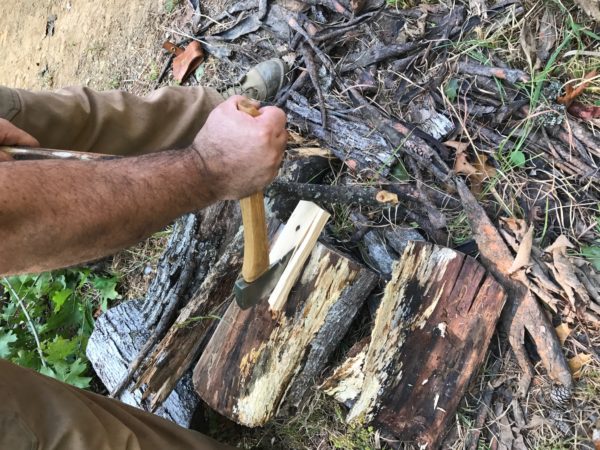 I learned another way to shave and baton wood. I am excited to share it.

Breakfast wasn’t bad either. 1/2″ thick bacon was a quasi religious experience for me…

I had to leave early this afternoon to head home. Reality calls, and responsibilities do not wait while one plays with knives and eats bacon. I was bummed to leave, but am so incredibly happy that I had the chance to spend a great overnight with some really awesome people.

I had several close friends and acquaintances who were there this weekend, and met many new people. One thing I really enjoyed was getting to spend time with Todd Hunt and Rick Bain in a much more laid back environment than the BLADE Show floor. I have gotten to know them through their Facebook live-streams, Todds writings for the blog, and through the knives of theirs we have reviewed. But there is no substitute for spending face to face time together, and Todd left me with a great gift before I left… 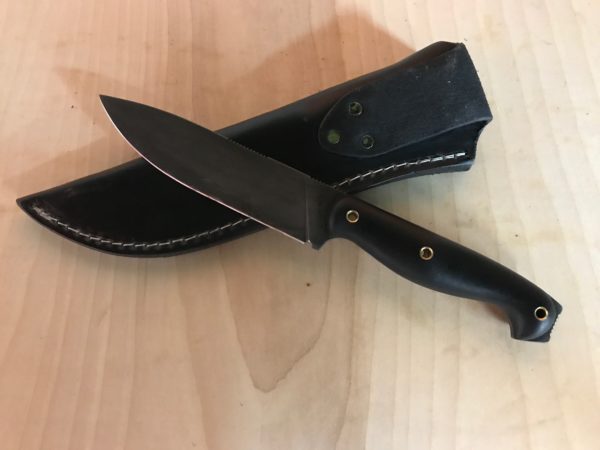 This Tradewater is a “cosmetic second”. There is a jakey squiggle to the plunge-line, and the knife doesn’t meet Todd’s high QC standards. Since he won’t sell it, he gave it to me to really knock the snot out of. It is a great knife in all other regards, and I can’t wait to see how it performs. It is a great size for a guide knife. It will be a great one to carry in the Smokies.