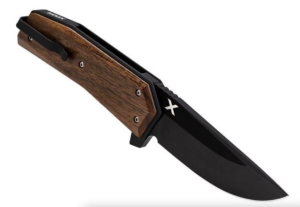 WOOX is well known for making some finely crafted stocks and blades that expertly blend materials to create unique and aesthetically pleasing tools. The new Leggenda (Legend) folding EDC knife features a unique blend of American Walnut, Carbon Fiber, and Carbon Steel to give the end-user a distinguishing blade to carry. There will be two options available for the Leggenda EDC folding knife including one with carbon fiber inlaid directly into the walnut handle. Each of the blades will be available both online through WOOX as well as their authorized retailers nationwide.

The Leggenda sticks with the distinct Italian-American design that other WOOX products feature and takes it a step further by incorporating Carbon Fiber highlights into one of its two designs. WOOX claims that the Leggenda brings world-class performance to the EDC knife world as well as cutting-edge materials to make it a high-performing, and outstanding EDC knife. According to WOOX, this EDC folding knife has been a project years in the making and it is a one-of-a-kind folding knife fit for any collector or knife enthusiast.