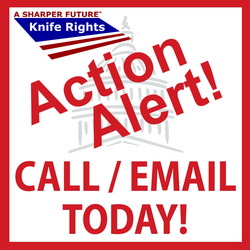 We are not yet done with 2020! Knife Rights’ Director of Legislative Affairs, Todd Rathner, has spent the better part of the past two weeks in Columbus, Ohio, lobbying hard to get our Ohio Knife Law Reform Bill, SB 140, out of committee. As a result of his efforts, SB 140 was just passed out of the House Criminal Justice Committee with a bipartisan vote of 7-4.

SB140 already passed the Senate 32-1 in June of 2019. We appreciate the leadership of Chairman George Lang in moving SB 140 forward. The bill now moves to the full House for action.

If you live, work or travel in OHIO, please use Knife Rights’ Legislative Action Center to ask House Speaker Robert Cupp to schedule a floor vote on SB 140 as soon as possible: https://kniferights.org/resources/congressweb/#/36

DO IT TODAY and help us push this bill forward!

1. Repealing the ban on manufacture and sale of “switchblade,” “spring blade” and “gravity” knives;

2. Clearing up the confusion in Ohio law regarding carry of ANY knife by defining a knife, razor or cutting instrument as a “deadly weapon” or “weapon” ONLY if it is used as a weapon. This would allow carrying any knife concealed in Ohio.

Knife Rights is America’s grassroots knife owners’ organization; leading the fight to Rewrite Knife Law in America™ and forging a Sharper Future for all Americans™. Knife Rights efforts have resulted in 32 bills enacted repealing knife bans in 22 states and over 100 cities since 2010.