Source: The Truth About Guns 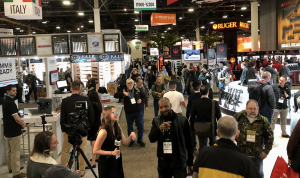 It’s been a difficult year-plus for the meeting and convention business, to say the least. The NRA recently cancelled its second consecutive annual meeting and exhibits and the 2021 SHOT Show was a Covid casualty as well. That said, the recent USCCA Expo in Fort Worth was well relatively attended.

However, in a move that casts an undeniable cloud over the prospects of the 2022 SHOT Show, SIG SAUER has decided that it will not be an exhibitor at the Sands Expo Center in Las Vegas in January. That includes the large, separate range day the company holds on the Sunday before SHOT each year.

SIG’s withdrawal is a big blow to the NSSF as SIG’s is one of the largest display booths at SHOT each year. What’s more, the decision could kick off a domino effect, causing other exhibitors who are still iffy about committing to SHOT 2022 to decide against it.

More at the link including Sig’s full statement and the NSSF response.

I was discussing the possibility of SHOT cancelling with a high-placed industry source. All it will take are a couple of more big dominoes to fall for SHOT 2022 to get scrubbed. I don’t think that would be a good thing for the industry.