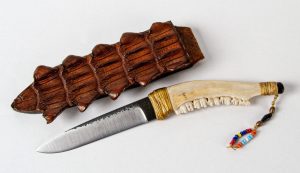 From July 19 to December 20, 2021, McKissick Museum at the University of South Carolina will present Carolina Knives: The Roots of a Revival, an exhibit showcasing over 100 examples of utilitarian and decorative knives by contemporary Carolina knifemakers. SC Humanities supported this exhibit and its associated programming with a Major Grant.

Since the mid-20th century, custom knifemaking has enjoyed a nationwide renaissance. Outdoor enthusiasts, people who hunt and fish, military personnel, and chefs have been inspired to take up making knives for their own and others’ use. The Carolinas proved to be fertile ground for a custom knifemaking revival. The South Carolina Association of Knifemakers got its start in August 1980 at the Third Annual Gun & Knife Show in Aiken. The North Carolina Knifemakers Guild was founded in June 1992.

Carolina Knives: The Roots of a Revival will explore this history as well as presenting a wealth of blade styles and types made by accomplished contemporary custom knifemakers from the Carolinas. The exhibit also will feature select examples of both manufactured and custom-made knives and blades forged outside the southeastern United States and in regions of Africa with strong blacksmithing traditions that informed the history of knives in the Carolinas prior to World War II.

In addition to the exhibit, a series of public programs will be offered over the summer and fall of 2021 featuring lectures, demonstrations, and other interactive activities, starting with an Opening Reception event on Thursday, August 5th, 5:30 – 8:00 p.m. at the McKissick Museum.