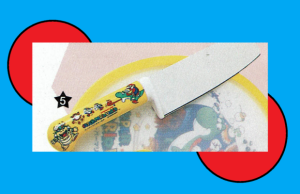 Last week a very rare piece of official Nintendo merchandise came to the attention of collectors online. This is the Super Mario World Knife, a kitchen knife emblazoned with Mario imagery, considered to be among the rarest pieces of Mario merch from its era.

Discussion of the SMW Knife took off last week after a tweet from Mario history/trivia account Supper Mario Broth, which cited a 2019 tweet from Tanooki Joe, a collector who runs the Video Game Art & Tidbits account. It was originally believed that the Super Mario Knife was never released – perhaps because of safety concerns – but, once the tweet started trending, collectors came forward and confirmed that it did indeed come out in Japan, although evidently not in very large numbers.

The SMW Knife is patterned after the Santoku, so it would make a good kitchen all-arounder, straddling the line between various larger and smaller, more specialized pieces of kitchen cutlery. We don’t know what the blade steel is, especially if we assume this came out around the Japanese release of Super Mario World in 1990. VG-10 is certainly an option, and it was our first, best guess.

I will stick with my Murray Carter for use. But I would love this in a collection.