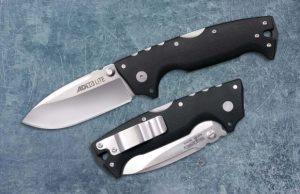 Cold Steel is returning to a modern Demko classic, the AD-10, for a budget-oriented Lite model. The AD-10 Lite makes the expected changes to blade and handle material to create a knife that is both more affordable and lighter than its predecessor.

The first Cold Steel AD-10 was part of Cold Steel’s 2019 catalog reveal. Released alongside the AD-15, it was, like that knife, modeled on an Andrew Demko custom. That Scorpion Lock-sporting sibling got a Lite variation last year, so we suspected that a similar expansion would eventually come to this Tri-Ad Lock model as well.

While things can vary slightly from one to the next, Cold Steel’s Lite designation brings a generally standard set of material alterations, designed with cost-saving, rather than weight-saving, in mind. The first is the blade steel, transitioned from whatever comes on the standard model to AUS-10A. Thus the AD-10 Lite loses its S35VN blade for this mid-tier Japanese stainless, which is likened to 440C in some circles, although not chemically identical to it. Blade length is the same, of course, as are the blade options, the classic Demko drop point or an American tanto.

So long as Cold Steel (GSM Outdoors) owns the rights to the AD series knives, they are going to ride them like a government mule. Even though the Demkos have struck out on their own. Cold Steel has also released their new Engage, which is a much more interesting knife. They sent me one and I am about a week into carrying it. I like it, though it is a bit of  beast.