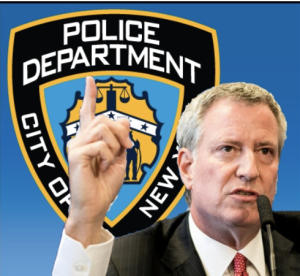 After our huge win last week repealing New York State’s ban on Gravity Knives in order to stop the flagrantly discriminatory arrests and prosecutions in New York City of those who carry common folding knives, over 70,000 to date and disproportionately minorities, unrepentant Mayor Bill de Blasio’s New York Police Department, both of whom strongly opposed the bill, have announced that they are unwilling to stop. Grasping at straws in their apparent resentment over being thwarted, they have dug up an archaic, rarely used Metropolitan Transportation Authority regulation and promised publicly that enforcement will continue on MTA subways.

Displaying an astonishing degree of arrogance, NYPD under de Blasio has stated they intend to continue this blatantly unconstitutional policy despite the crystal clear message from virtually every other significant leader in the state, including, notably, the Attorney General, that it is well beyond time to stop this discriminatory enforcement scheme.

Knife Rights is aggressively working with our partners in New York to address this outrageous last-gasp effort on the part of the Mayor and his police force to continue their unconstitutional persecution of knife carriers, and especially of people of color.

Until this issue is dealt with, those who travel via the MTA system in New York should probably continue to adhere to our prior cautions about carry of any lockblade folding knife. Using the vague wrist flick “functional test,” most any lockblade knife might be deemed an illegal gravity knife. And, you still need to remain compliant with the City’s Administrative Code restrictions on length and carry.

See below the text of New York Codes, Rules, and Regulations; Title 21 – Miscellaneous; Chapter XXI – Metropolitan Transportation Authority; Subchapter D – Rules and Regulations Governing the Conduct and Safety of the Public (emphasis ours):

Section 1050.8 Weapons and other dangerous instruments.

(a) No weapon, dangerous instrument, or any other item intended for use as a weapon may be carried in or on any facility or conveyance. This provision does not apply to law enforcement personnel and persons to whom a license for such weapon has been duly issued and is in force (provided in the latter case the weapon is concealed from view). For the purposes hereof, a weapon or dangerous instrument shall include, but not be limited to, a firearm, switchblade knife, gravity knife, boxcutter, straight razor or razor blades that are not wrapped or enclosed in a protective covering, sword, shotgun or rifle.

Pursuant to section 1204(5-a) of the Public Authorities Law, any person committing one or more violations of these rules shall be subject to either:

(a) criminal prosecution in the criminal court of the City of New York, which court may impose a fine not to exceed twenty-five dollars or a term of imprisonment for not longer than ten days, or both; or

(b) civil penalties imposed by the transit adjudication bureau in an amount not to exceed one hundred dollars per violation (exclusive of interest or costs assessed thereon).

This ought to help DerpBlasio’s underwater approval ratings. He is like a petulant child, refusing to surrender to the will of the Legislature for the betterment of the people. Thankfully for the majority of us his Presidential aspirations are a joke, but the innocent people of New York continue to suffer under a miscarriage of justice.

It is true that this applies to the Subway, but given many ordinary New Yorkers depend on the Subway to get pretty much anywhere, this prevents them from exercising a legal right and makes them subject to arrest.

Now that even Cuomo finally relented, DerpBlasio and Cyrus “Harvey’s Handmaiden” Vance completely own this travesty.