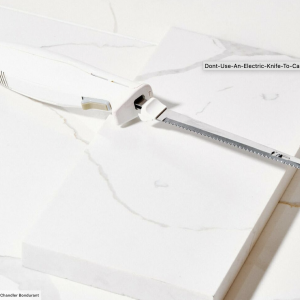 There are many wonderful traditions associated with Thanksgiving — watching football for hours on end, bickering with almost-forgotten family members, midday naps. Pulling out that old, dusty electric carving knife, however, is not one of them.

You know the one. It has a big plastic grip and an impossibly loud electric motor. You use it twice a year and it comes with its own weirdly formal, felt-lined storage box. After 15 minutes of shuffling through the back of every drawer in your kitchen, you find it tucked behind the juicer. It is that useless.

The electric knife was invented by one Jerome Murray, who also invented the airplane boarding ramp and a medical pump used for open-heart surgery, and it is essentially two serrated blades clipped together with a motor tacked on. Murray’s idea was to make carving larger cuts of meat, such as whole turkeys, a simpler task. And, frankly, electric carving knives aren’t absolutely terrible at that one thing. During a thorough test, Cook’s Illustrated found them especially adept at keeping the crispy skin of turkey and chicken adhered to the meat. The problem is everything else.

I will be using my Gil Hibben set.