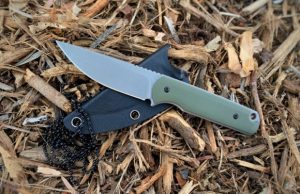 Ferrum Forge is preparing a diminutive, highly portable fixed blade for release next month. Tentatively titled the Lackey, the knife was made to travely widely and handle the broad gamut of cutting tasks that fall under the ‘everyday’ designation.

The Lackey’s 2.89-inch drop point blade, made from D2 steel, bears a family resemblance to other Ferrum Forge models but Williamson said he took his primary inspiration from the bladecraft of yore. “I was actually looking through my copious historical weapon books and really liked the concept of the shirimono kodzuka or Byknife and just modernized it.” The Lacky can slice, cut, poke, pry – pretty much whatever a user needs, hence the potential name. “It will do whatever you want. It’s even balanced enough to be thrown,” Williamson notes.

Looks like a wonderful tool. Nothing fancy, just the “distilled essence of knife”