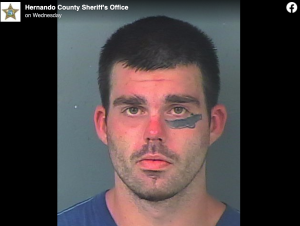 It would be easy to jump to conclusions in the case of Florida Man Justin Arthur Allen Couch, who has a machete face tattoo — that apparently covered up an earlier SS tattoo — and is being accused of attacking a man with a machete. Couch, originally straight out of the D(etroit) according to his Facebook page, was arrested by the Hernando County Sheriff’s Office for attacking a man and hitting him with the flat side of the machete.

Put it this way, we have ourselves an old fashioned machete swinging incident that you typically get in Florida this time of year when it gets hot and people need to settle differences. Since I like to be fully transparent with my he said/he said arrest posts, here’s the full transcript from the sheriff’s office. We’ll let a court of law decide if this is exactly what happened.

Ahhh Florida Man…keep being you.

(read the transcript at the link)