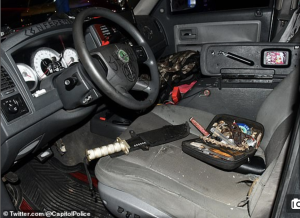 A California man was arrested with machetes and knives outside of the Democratic National Committee’s headquarters in Washington, D.C. early Monday morning, where he was found sitting inside a truck covered in swastikas and other white supremacy logos.

Officials say officers pulled his truck over after they realized it did not have a license plate, and noticed there was a bayonet and a machete inside – both of which are illegal in Washington D.C.

Donald Craighead, 44, of Oceanside, California, is now being charged with possession of prohibited weapons, the United States Capitol Police announced.

Nothing I have read actually says that this was related at all the DNC HQ, only “near”.  But there is a narrative to push.