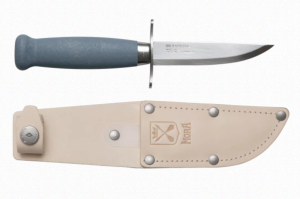 Morakniv has returned to its longstanding, kid-friendly Scout model, refreshing and expanding the series. The new Scout 39 models maintain their safety features, but offer more colors, a new sheath, and a second blade option for more advanced beginners.

For as much as their products are well-regarded in the enthusiast community, Mora is equally, if not more so, a knife maker for the masses. Their products are available in big box sporting good stores in the states, and almost as recognizable abroad as heavy-hitting European folders like the Opinel or Swiss Army knife.

Given their enormous reach, it makes sense that Mora would offer knives designed with young, first-time users in mind. The Scout 39 Safe was that knife, delivering most of the performance of a “grown-up” Mora with some added care taken for learning users’ safety. A cross guard, a very rare feature in the Mora lineup, helped keep fingers away from the cutting edge, and a rounded tip precluded the possibility of accidental pokes.