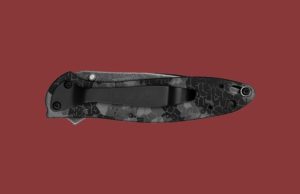 Hot on the heels of a Factory Special Series release from Zero Tolerance, Kershaw, the other half of the KAI USA coin, gets an FSS model of its own. This one is a dressed-up version of the Leek, Kershaw’s most recognizable knife.

What can we say about the Leek that hasn’t already been said? It’s probably Ken Onion’s most famous production knife design, which, considering the amount of work Onion has done with Kershaw and others, is really saying something. But, in the years since its original release, as the everyday carry knife category grew and grew, there may be some newer members of the knife community who got into the hobby after the Leek’s heyday. Honestly, we think it still holds up when compared to the next generation of EDC knives, with a blade shape ideal for day-to-day chores and a quirky look all its own.

I still carry mine frequently. It definitely holds up.