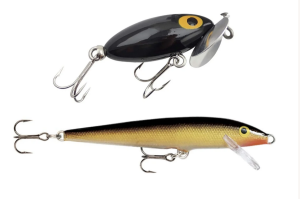 Ever since the first artificial lures were carved out of simple wooden blocks, anglers have constantly been trying to construct a better fishing lure. As we learned when we visited the Berkley fishing lure factory in Iowa last year, the business of lure designing is more elaborate than ever. These days designers use computers and tank testing with captive fish to capture literally thousands of datapoints that are then used in the design of new baits.

Indeed, things have come a long way since James Heddon tossed a whittled stick into a nearby lake near Dowagiac, MI in the late 1890s. Local legend says the stick hitting the water elicited a strike from a bass. It was this moment that allegedly was the lightbulb moment that gave Heddon the idea for the first wooden hardbait. It was shortly after he began designing and selling his own artificial lures.

This is off topic, but I got sucked down the rabbit hole. I was a flyfishing guide for 20 years, and don’t do a ton of spin fishing. But my tackle box is almost entirely made up of these classics, rather than more modern, hi-tech lures. I think the recommended list for my first box for Camp Adanac (Canada spelled backwards) in Canada as a kid was: Dardevle, Flatfish, Rooster tails, Jitterbug, Hula Popper, some jigs and floating Rapalas.

And a Rapala filet knife, made by Martiini – there…it is now a knife post.