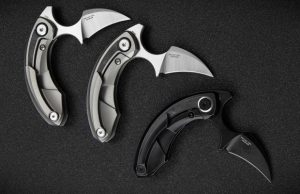 Ostap Hel‘s Bestech Bouquet is getting its third flower soon, in the form of the Strelit. Like the two previous models in the series, the Strelit takes its inspiration from a real-world plant; but it takes that inspiration in a very different direction than either.

One glance at the Strelit and you can see the headlining feature: this is one of very few – if any – high-end, production push dagger designs. In the fully-open position (kicked off via flipper), the Strelit’s 1.23-inch hawkbill blade points out perpendicularly from the side of the knife instead of the top. Huge, sweeping grooves on either side of the tang provide a neck for the user’s fingers to lock around in a fist-style grip.