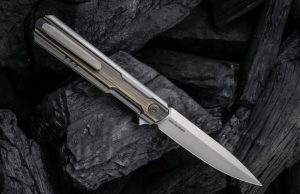 Ostap Hel second collaboration for We Knife Co., the Peer, is arriving at last. The knife was first shown off a year ago and, now that its release is nearly upon us, we reached out to Hel to discuss the knife’s origins.

Hel likes to draw on varied sources for his knife designs; the name “Peer” points us in the direction of this one’s inspiration. In England, a “peer” is any person with a rank in the nobility: duke, viscount, earl, baron, or marquess. While these titles maintain in some form today, for many people they mainly conjure images of medieval life – one facet of which was swordplay. The classic English straight sword was a standby for hundreds of years, in dozens of roles – and Hel says its clean look originated the Peer’s design.

I am not super familiar with Ostap Hel. But the design looks sharp and WE makes a fine tool.