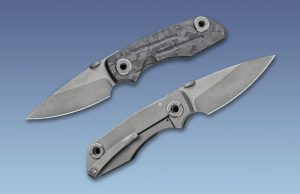 After pushing the envelope with the one-off Phenomena 3, Jakub Wieczorkiewicz of Poltergeist Works is trying something totally different for the 2600, his latest custom model. This new knife prioritizes compact characteristics while still maintaining wide functionality.

The Phenomena 3 pushed folding knife size to the limit with a massive 4.5-inch blade. Wieczorkiewicz took the opposite approach with the 2600, which has a blade length of just 2.6 inches. Its blade shape is a wide drop point, which allows for a lot of belly and an acute tip to get the most out of that reduced real estate. And while the 2600 is not a Phenomena series knife, it does take another cue from its one-off predecessor in terms of opening method, opting for an ambidextrous thumb disk instead of studs or a flipper.

4.5″ is really beg for a folder. not sure about the disc flipper though. I have never been a fan.