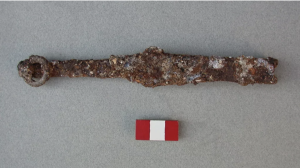 Archaeologists in Turkey have discovered two “rare and unique” swords in a heavily fortified city from the Byzantine Empire, a new study finds. One of the swords, unearthed in a church, may have been placed there as an offering.

The swords are so unique, it’s difficult to determine what ethnicity or mercenary group wielded them about 1,000 years ago, the researchers said.

I love this stuff.