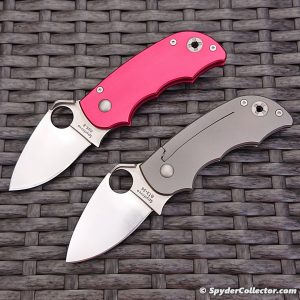 The Spyderco Salsa is one of those oddball designs that just can’t get any respect. However, what many ‘presumed’ knife guys call a ‘weird design’ is often an attempt to create something new. That is no different with the Salsa. It probably was Spyderco’s first true lil’ big knives. A full sized folding knife that tried to hide in plain sight from non-knife people.

The Salsa was introduced in 2002. Looking back, it’s no surprise that it arrived when it did. Right after 9/11, many strict knife laws were introduced. Knives had to become smaller. This is a challenge for many knife makers. However, Spyderco has been working with the issue of public perception of (their) knives since the beginning. The Spyderco round hole allowed for one-hand opening as quick as any automatic. It was no accident that the blunt-tipped Mariner was introduced before the Police model. Many people thought these fast opening (and fiercely serrated) blades looked ‘scary’. The C09 Co-Pilot was introduced in 1990, and was intended to be a knife one could take anywhere, even on an airplane. Times have changed, but Spyderco never stood still. And I feel they were better prepared than most knife companies for the post 9/11 knife world.

Read the whole thing. There are fanboys, and there are those that transcend and become true experts in a company. Spydercollector is the OG of the archetype.