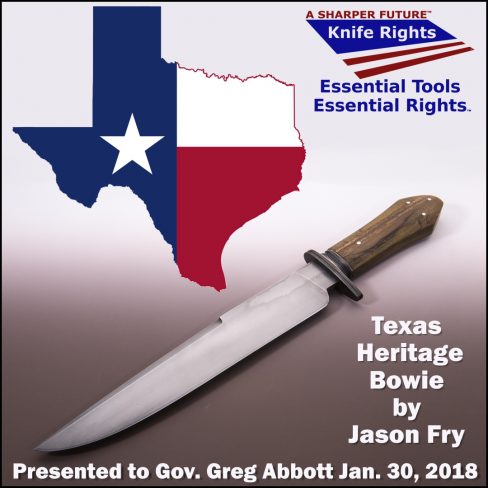 U.S.A. –-(AmmoLand.com)- Knife Rights’ bipartisan Knife Law Reform bill, HB 956, which was passed by the Texas House by an overwhelming vote of 142 – 2 and which passed the Senate last session, was allowed to die in the Texas Senate without a vote as their regular session ended.

HB 956 would have removed from statute a number of places where Location-Restricted Knives (having blades over 5 1/2 inches) are banned, including restaurants and bars that derive 51% of their income from sale or service of alcoholic beverages, amusement parks and places of religious worship.

The Senate State Affairs Committee held a hearing on the bill where there was no testimony in opposition.

Governor Abbott supported the bill and there was no question that we had bipartisan support on the committee. Almost all the members of this committee assured us they would vote yes for the bill. Despite there being no question the bill would have received a favorable vote in the committee, and despite hundreds of emails from our supporters urging a vote, Chairman Bryan Hughes never set a vote on the bill

Nobody involved has fessed up to killing this very popular bill. It would appear that all too typical internecine Texas politics resulted in its death. Texas isn’t nearly as Texas as most folks, including many Texans, believe.

Knife Rights’ Director of Legislative Affairs, Todd Rathner, spent a total of nearly two months at the Capitol this year shepherding the bill through Texas’ legislative morass. Texas takes more hands-on effort than almost any state we’ve ever worked in, yet sometimes even that is not enough to overcome the quagmire that is Texas politics.

Knife Rights Chairman Doug Ritter said, “House sponsors Representatives Harold Dutton and John Frullo deserve our heartfelt thanks for continuing to support our efforts to reform Texas knife law. We truly appreciate their personal commitment to getting this done. We’d also like to extend our sincere appreciation to Knife Rights supporter Rick Briscoe and Tamoria Jones, Chief of Staff to Rep. Dutton, both of whom worked their butts off trying to get this done. They have all been with us in this fight since 2013. It did not fail for lack of effort on their part.”

Ritter also expressed thanks to Senate sponsor Drew Springer for his efforts and congratulations to him on the signing into law of his resolution naming the Bowie Knife the official State Knife of Texas. Unfortunately, while Knife Rights repealed the ban on carrying Bowie knives back in 2017, it remains illegal to carry one with a blade over 5.5 inches, or even a modestly large chef’s knife, into a 51% establishment, a house of worship or any other place where Location Restricted Knives are still banned.

Ritter concluded, “while we are frustrated that we were unable to get this bill across the finish line this session, we can take some solace in having successfully killed the Texas Knife Lockdown bill, HB 4415.” That ill-conceived bill would have required broadly defined “retail establishments” in Texas, including knifemakers at knife shows, to only display knives “in a locked transparent case accessible only with the assistance of an employee of the establishment.”