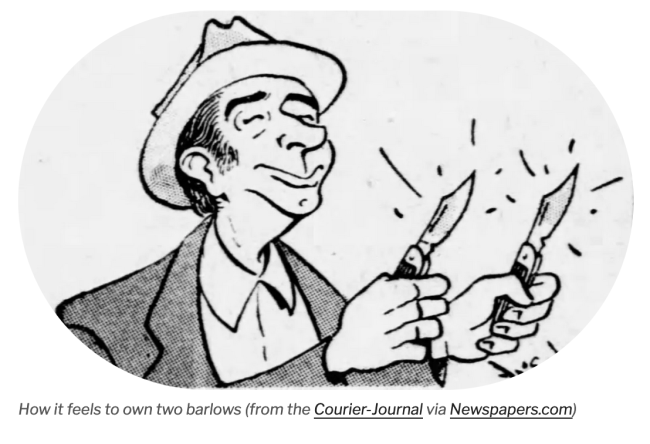 The Barlow Bearcat Club is an exclusive club with a membership consisting of knife enthusiasts who own a Barlow knife. It is based upon a club run in the mid 20th century for people who owned Russell Barlows. Allan Trout, a well loved journalist for the Courier-Journal in Louisville Kentucky, started the club as one of the “gimmicks” for the column he wrote called “Greetings”. However, Mr. Trout found the club quickly grew due to its fun light-hearted nature and the popularity of the Russell Barlows. It probably didn’t hurt that it was advertised as “the only club in Christendom without dues and duties, or aims and aspirations”. Coincidentally, this revival of the club shares most of those same lofty goals!

This re-imagining of the Barlow Bearcat Club aims to recreate the camaraderie and irreverent fun of the classic knife club in a virtual setting. Knife clubs historically have played a huge part in the knife community, bringing together knife enthusiasts before the internet allowed such easy interaction. While forums and Facebook groups are a great way to interact with other knife lovers, I think a more traditional club system offers its own unique values. I hope it offers a space to dive in deep on everything surrounding barlows and a connection to others who own, collect, carry, and use barlows.

This is a resurrection of a gag club popular in knife collector circles back in the day.

from our September 2021 issue: