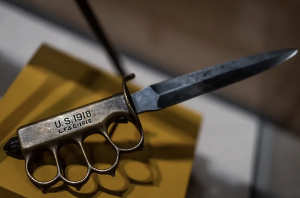 Knives have been with us for as long as when the first caveman had that eureka moment and thought of sharpening stones and animal bones to kill wild animals. From then on, countless designs and ideas sprung up designed for different purposes. They were no longer just used for killing animals but also for close-combat purposes, whenever needed— like during WWI.

Combatting in the trenches was undoubtfully difficult. The attack, counterattack, and defense were all made on foxholes dug into the ground. What’s more, opposing trenches were usually close to one another. Fighting in the trenches of WWI involved a lot of storming the enemy’s positions brutally close combat. Weapons like long bayonets fixed to rifles proved unwieldy in the narrow trench lines.

What would be the best weapon for close combat in a confined area? Knuckle bar? Knife? How about both? That’s what Henry Disston & Sons, a civilian company making tools and saws, thought when they designed the M1917 trench knife. Inspired by the French Nail knives, it has a long, triangular blade and a knuckle guard on its handle. Henry Disston & Sons were not traditional knife-makers, so the M1917 turned out to be rather flimsy, and since the blade was triangular, it could only stab but not cut.

My usual disclaimer applies when sharing something with such specific history. I have not fact checked everything in the article. For the definitive piece, see Frank Trzaska’s piece in Military Knives: A Reference Book