Source: We are the Mighty 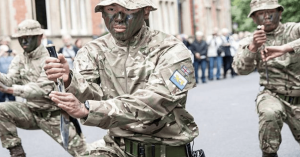 The kukri, with its iconic downward curved blade, is a chopping, piercing, slashing, and smashing annihilator. It’s the traditional utility knife of the Nepalese people but most commonly known for its association with the Gurkhas. Some even call it the “Gurkha blade” or “Gurkha knife.”

The weapon became known to the Western world during the Anglo-Nepalese War—or Gurkha War—of 1814 between the East India Company and the Kingdom of Nepal. The conflict started as a border dispute and lasted until 1816. The British company was the invading force, while the Nepalese maintained a defensive position.

During the peace signing Treaty of Sugauli, the British added a clause that allowed them to recruit Gurkha warriors and Himalayan men into its military ranks, and the Gurkhas have been part of the British forces ever since. But the knife—in its current design—can be traced to 13th century Nepal. Some historians place the weapon even further back to around the time of Alexander the Great (356 – 323 BC), making it one of the oldest weapon designs in the world.

Westerners are biased too much towards chopping. The Gurkhas often use the kukri as a fast strike short strike weapon. The mass of the blade ensures a devastating injury, even without much wind up.

View Linked Article
1
Tags: Gurkhas  Kukri  We are the Mighty