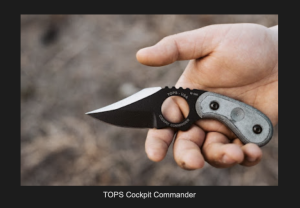 It appears TOPS and Fred Perrin have had a disagreement.  A disagreement that has lasted 20 years.  Not being a deep insider, I can only wonder.  I’ll let you make up your own mind.

TOPS has announced that this disagreement has lasted 20 years and they have decided to put an end to it.  TOPS Cockpit Commander is retired, effective immediately.

As of my typing, you can still find it on Amazon, but the major retailers, Smoky Mountain, Blade HQ, Knife Center and others, no longer have the Cockpit Commander for sale.  I found two sold on ebay as recently as July 15, prior to the announcement.  Many internet commandos have declared it an instant collectible.  It is a rhetorical question, but can any mass-produced factory knife be an instant collectible?

Fred Perrin is an interesting fellow.  Fred has been a world-vetted Tae Kwon Do and stick-fighting champion, a French Army Commando, professional writer, martial arts instructor and one of France’s most recognized professional knifemakers.  I have two of his knives, a LaGriffe neck knife from Emerson and a Fred Perrin PPT from Spyderco.  Both are excellent knives.

Fred posted on Facebook, and I take that as a small window into the ‘misunderstanding.’

“I want to say how much I appreciated this move, it is very rare that a brand recognizes its mistake…   I will gladly design something for TOPS that is really my idea and not an “interpretation” of my work, as it’s often put to work around this design.”

I carefully edited Fred’s statement with replacement of what I assume were accidental capitalizations and missing punctuation.

I like TOPS Knives and I hope this problem is truly resolved.