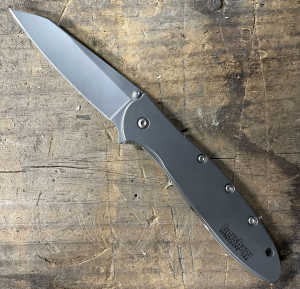 Mr. Scurvy and I regularly debate all sorts of things over DM. One of our perennial topics is the Kershaw Leek. I strongly dislike this knife, especially compared to how well it sells. Mr. Scurvy correctly points out that I am missing the point. This is a knife for the masses not us. But what makes it a knife that has such a polarizing reaction?

This all came about because my father in law came to me and asked: “I have gotten back into fishing [he just recently retired] and I want to carry a knife. Do you have one for me?” Of course I did, and so I produced for him a bevy of choices. In the end it came down to the Asher Nomad and the Kershaw Leek with Reverse Tanto blade (which is better than the original). He took the Leek in a second. I was not surprised, but it was a blind test that confirmed Mr. Scurvy’s point—the Leek has real appeal.

Objectively there is a lot to like here: its thin, its sharp, it has a simple, clean look and design, it is not that big, not that heavy, and not that expensive. Looking at it as a set of bullet points, the Leek seems like it would be in my wheelhouse. The bullet points make it easy to sell Leeks. But its the long term experience that turns me off. Why?

While thin blades are always better, they are not always done right. The Leek’s blade, especially in the standard blade shape, is just too thin at the tip. Compared to something like the Dragonfly II, it is slightly pointier but much more fragile. There isn’t a lot more you can do with the additional acuity, but it is a real liability. So this is thin done incorrectly.

I am also not a fan of the overly complex deployment and safety system. The safety lock is a feature that sounds good but, in my experience, it is solely a negative. Over and over again I would go to kick the knife open only to realize that as it was in my pocket, the safety was triggered. Its pretty loose and so having it accidentally activate happens more than I would like, compared, say to the safety on something like the SOG Flash AT.

Fun piece about I knife I have long loved.  It isn’t always the perfect knife for the situation, but more often than than not it is knife enough.