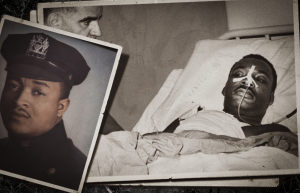 The skies were clear on Sept. 20, 1958. Al Howard, a 31-year-old patrolman with three years at the New York Police Department, was driving his usual beat in Harlem that Saturday afternoon. He and his rookie partner, Officer Philip Romano, had just met hours before. The alert cops listened as a dispatcher’s voice came through the radio to report a disturbance at the Blumstein department store. Howard stepped on the gas and sped toward the scene with sirens blaring.

When they arrived, they heard screaming coming from the second floor of the store. The officers ran toward the chaos and saw a woman restrained on the ground and an African American man dressed in a dark suit sitting motionless in a chair. The man was 29-year-old Rev. Dr. Martin Luther King Jr., and he had just been stabbed in the chest with a 7-inch steel letter opener. The civil rights activist was at the store to sign copies of his book, Stride Toward Freedom — about the bus boycott in Montgomery, Alabama — when the deranged woman attacked him.

Appalled local leaders looked on in fear, and another hysterical woman stuck her hand out in an attempt to remove the blade from King’s chest. Howard, however, intervened. He knew the weapon was likely preventing King from bleeding to death, and he immediately took control of the situation.

I had never heard this story…