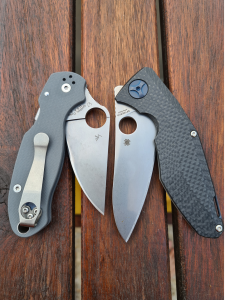 Did you know that John Rambo was inpired by a Season In Hell by Arthur Rimbaud. Also David Morrell, First Blood’s author, was looking for a name for his heroe and his wife brought him some apple: Rambo’s Apples. Anyway, Rimbaud was not born in Bowie, Arizona like John Rambo but in Charleville, a city dear to my heart, in the Ardennes and for fans of Nine Princes in Amber from Zelazny. So let’s see why that knife could be a Rimbaud’s knife.

As you can notice, they are dust… No, I mean you can notice the “Drunken” texture designed for a high performance grip: a wave pattern. There is a poem from Arthur Rimbaud named “Le Bateau Îvre” -“The Drunken Boat”. This poem is famous because, at least in French, its verses are built like waves and you can feel in your guts, the fear of a sailor on a boat going out of control in the middle of a tempest. (“The poem describes the drifting and sinking of a boat lost at sea in a fragmented first-person narrative saturated with vivid imagery and symbolism.” dixit Wikipedia. ” Rimbaud, then aged 16, wrote the poem in the summer of 1871 at his childhood home in Charleville in Northern France. Rimbaud included the poem in a letter he sent to Paul Verlaine in September 1871 to introduce himself to Verlaine. Shortly afterwards, he joined Verlaine in Paris and became his lover. Rimbaud was inspired to write the poem after reading Jules Verne‘s novel Twenty Thousand Leagues Under the Sea, which had recently been published in book form, and which is known to have been the source of many of the poem’s allusions and images. Another Verne novel, The Adventures of Captain Hatteras, was likely an additional source of inspiration.”

Kind of odd writing to find in a knife review.