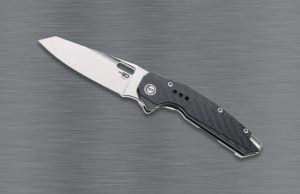 Todd Knife and Tool has its latest production design arriving through Bestech. It’s called the Nyxie, an EDC knife that builds on the visual direction taken by its predecessor in the Bestech/TLK collab series, the Syntax.

TKT was co-founded in 2018 by brothers Seth and Teryl Todd (the latter also runs an EDC YouTube channel as Zelrick42). The shop hit the ground running with the Roxi, a custom (and later production) knife with all the elements that would become TKT staples. TKT knives take obvious visual inspiration from industrial equipment, with hard lines and evocations of cog wheels and gear teeth, but bring them together in designs that are uniquely slick. With the Roxi setting the standard, TKT has been building out their catalog ever since.

Not a company I am super familiar with. Glad KnifeNews gave a bit of backstory.

I know that naming knives is one of the most frustrating and borderline masochistic tasks in the industry. This knife does not say “Nyxie” to me.