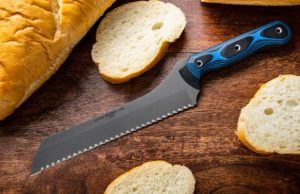 After first showing up on the radar in 2019, the full TOPS Dicer Set has arrived at last. These knives comprise the first full line of kitchen knives from TOPS and can be purchased in multiple different ways.

On one level, the Dicer Set encompasses a very standard set of kitchen knives. You have a chef’s knife with an 8-inch blade, a 3-inch paring knife, a 7-inch serrated bread knife, and 4-inch steak knives available in serrated and plain edge versions.

So far, so standard. But then there’s the 10-inch Slicer, a big blade that we described as a “kitchen sword” when we first saw it at SHOT 2019 – and for good reason: with its broad drop point blade and suitably beefed up ergonomics, the Slicer looks almost like an outdoors fixed blade, something that would be used to chop brush on a jungle trek; in other words, like a conventional TOPS offering. That being said, it is actually designed to work with meat and other big culinary cutting endeavors, and with its comparatively thin blade stock of .09″ should be well up to the task.

We gave away a Dicer chef’s knife when it was first released. It is nice to see them finish the set.