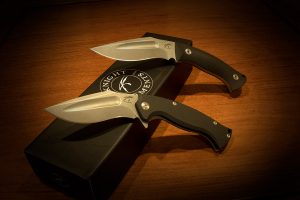 Jason Knight is a name that should be very familiar to every savvy knife enthusiast.

A former judge on the hit television show Forged in Fire, Knight is an American Bladesmith Society (ABS) Master Bladesmith who has earned numerous awards for his work, including the ABS’ coveted B.R. Hughes Award for the best knife by a Mastersmith candidate.

Although the scope of his skills includes a wide range of styles and designs, he is best known for his highly refined expressions of the iconic Gurkha kukri knife. Although a Jason Knight custom kukri might be out of reach for most, not so with his production models, detailed below.

Like most world-class bladesmiths, Knight’s handmade knives are in extremely high demand. To be able to share his innovative designs with a broader audience, in 2017, Knight teamed up with AJ Singh, owner of Tactical Elements, Incorporated, one of the premier purveyors of elite tactical tools. Knight wanted to create a production version of one of his kukri folder designs and was looking for an apt company.

EDC Kukris are such a strange concept to me.