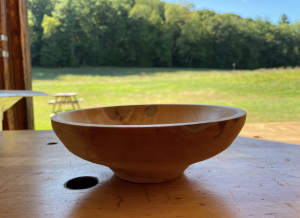 Last weekend my Dad and I went to Homestead Woodworking School (it was excellent!) for a class on woodturning. We both have done woodworking for a while, but neither of us has a lathe or had done any turning whatsoever, so it was a new experience for both of us (we also got BBQ on the way home making it just about the perfect day). While there we used only two different gouges (the tools used in woodturning look like huge chisels but are called “gouges” instead). Both ran M42 steel and you can learn more about it from Larrin here. They were sharpened in a specific way—a fingernail grind. The entire process got me thinking about steels and grinds and questioning what we knife folks think about knife steel.

One thing that blew me away was just how punishing turning is on steel. We did green turning, meaning the blanks were freshly cut. They were so freshly cut that at 900 RPM, water came off in a small spray. This combination of water plus speed meant that the gouges were being subjected to an insane torture test. This torture test made the bro-science testing on Youtube look like a trip to the knife spa. Think about why: the gouge, to be effective, was basically impacting the wood (black birch, BTW) 900 times a minute, but only at the very, very edge of the gouge (if you are doing it correctly you can get huge, visually pleasing shaving leaping off the work piece in a bit of chip ballet). Because of the hardness of the wood and the moisture content, the edge of the gouge was forced to confront the worst things for steel—water and repeated impacts. But it did fine. There was no chipping and while the gouges were resharpened just after lunch that was after three hours of 900 impacts a minute. You’d expect them to be dull. Hour after hour, impact after impact, the M42 held up exceptionally well despite (or because of) its hardness of 69 HRc.

This was a great piece. I would love to hear Dr. Larrin Thomas talk about steel specifically for woodturning.