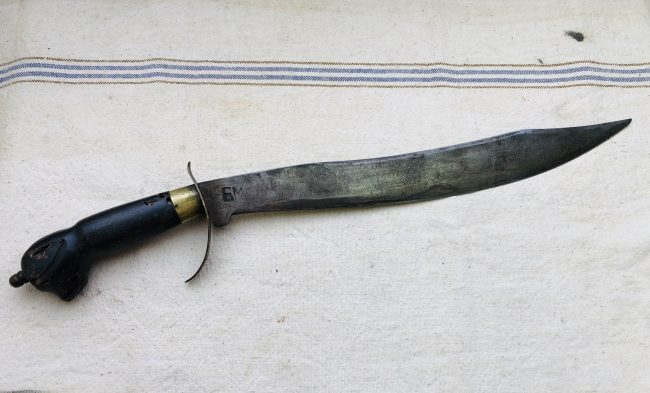 One of my favorite aspects of this job is that I never know what might be passing through the office on any given day. Usually it is knives, but one day it was Bill Moran’s Stetson hat for some reason or another. I even had the chance to use an authentic British Fairbairn Sykes Dagger from WWII as a letter opener for a few days.

While an individual knife might not be significant enough to find its way into the Knife Magazine print edition, there is almost always something interesting to share, and these digital pages are the perfect venue for this.

Today’s knife is what is known as a “Negrito Bolo”, a traditional Filipino pattern which was cranked out in large numbers in the years following World War 2. The “Negrito” are one of many ethnic groups in the Philippines, named by the Spanish for their darker complexion than other groups.  Countless examples of these knives were sold to GIs and Sailors, and can now frequently be found at knife shows and in online auction sites.

Bill and Debbie Wright describe these knives in their book Theater Made Military Knives of World War II:

“Many knives were made in the Philippines following the end of WWII and were sold or given to GIs by local natives. They were made in many different sizes, shapes, and qualities. It has been reported that many of the blades were hand forged from Jeep leaf springs.  Many of the sheaths were wooden, and finely hand carved with designs of spread wing eagles, “U.S.” or “Victory”.

This book is available for purchase from our online store .

This particular bolo is on the rougher side of construction. Between examples from the Wright book, as well as examples from this excellent post on The Viking Sword, – a forum dedicated to ethnographic arms and armor, we can see where ours fits on the spectrum. Some of those examples are really nice, especially those with presentation engraving. Like many, ours makes reference to the Philippines, plus “Manila” and “1945”. As a side note, Negrito Bolos, Bowies, and related knives continued to be marketed to Servicemen and other tourists, up through the Vietnam era. The year of manufacture is frequently present in both early and later examples. 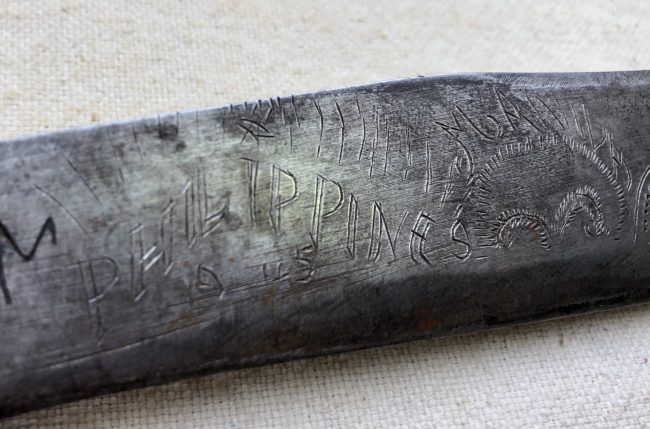 One thing this one displays is the most elaborate, if amateurishly executed floral motif of any I have seen. 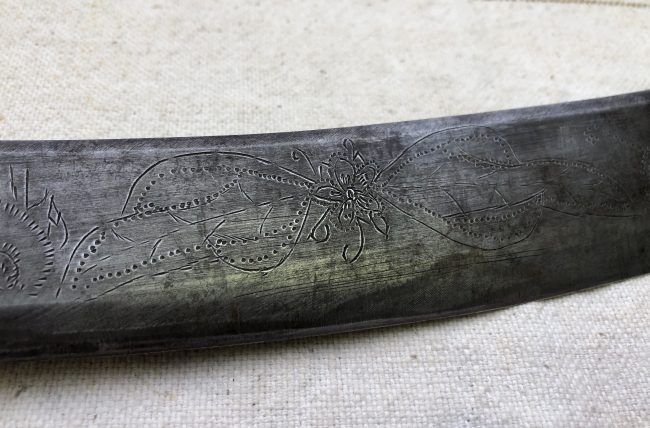 continuing towards the tip… 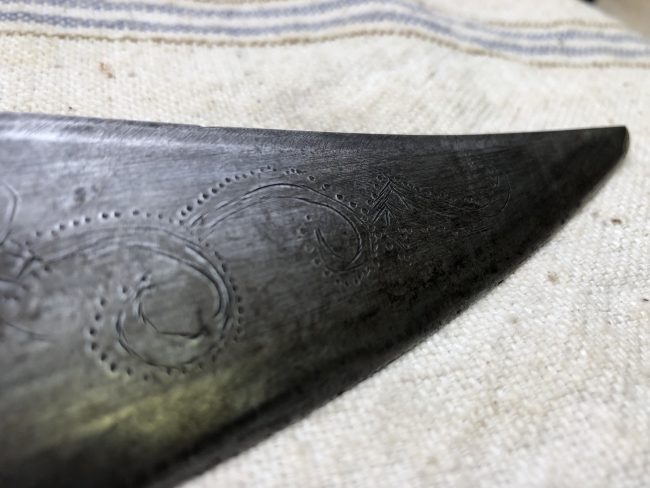 I mentioned this is on the lower end of the quality scale, as is evidenced by the file marks from when the knife was constructed. As knifemaker Will Woods likes to say, “at a certain price point all the lines have to be going in the same direction. You can clearly see the knife was finished after the handle and guard were added. 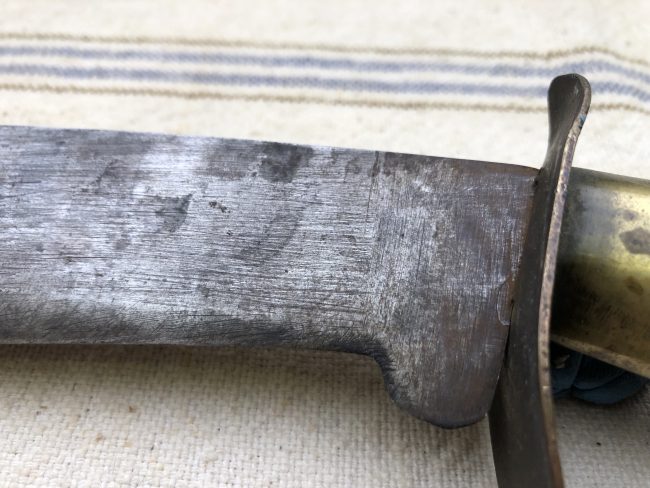 Another noteworthy aspect to this knife is the damage to the horn (likely water buffalo) handle. It shows signs of burrowing by Dermestidae or Carpet Beetle larva. This is common on antique tortoise and horn items. Incidentally, if you own knives, razors, or other items with horn or shell components, storing them with naphtha moth balls is effective protection from this pest. You can read more about Dermestidae here. 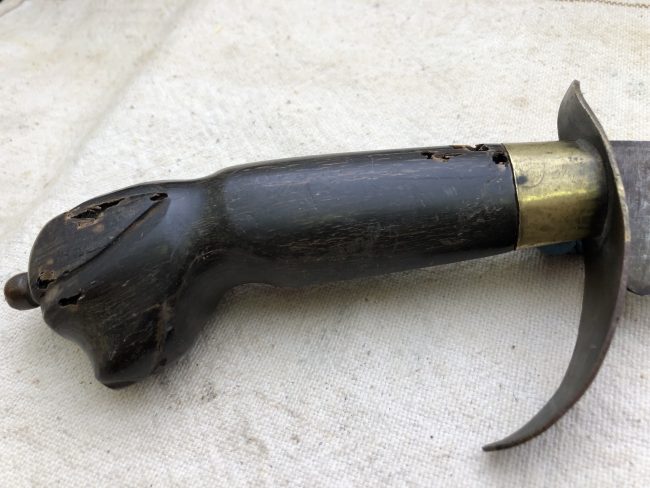 I can’t tell if the carving on the pommel is supposed to be a bear, a dog, or something else entirely, though all ranges of decorative patterns or animal shapes show up in Negrito bolos.

If this knife could talk…

I would like to ask who was its owner. Was it a sailor on port-call who bought it from a tourist vendor? Did a GI stationed in Manila during the postwar reconstruction exchange it for a handful of chocolate bars and a pack of smokes? Was it once proudly displayed on a shelf or tucked away in the attic? Did the owner ever show his grandkids and tell stories of his time serving in the Pacific? Did the person who decided to part with it know anything about the knife or its history? At what point did it suffer the beetle damage?

Knives, even fairly mundane tourist trinkets such as this can be full of stories, many of which we will never know. But it is fun to contemplate as you turn the knife over in your hand.

Finally, this youtube video shows several wonderful examples of Filipino bolos and related knives. There are a few errors in his narration, but the video is worth a watch if you are interested in the style.

Please leave a comment if you liked, disliked, or were completely ambivalent about this post. I am going to be constantly looking out for content like this to share, and I thought that this was a good one to open the “If knives could talk” series. Not knife of particular significance, but full of stories for sure. 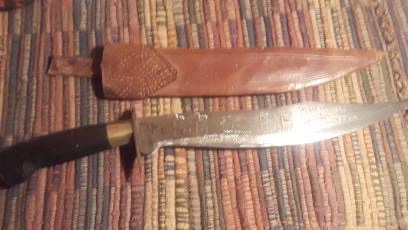