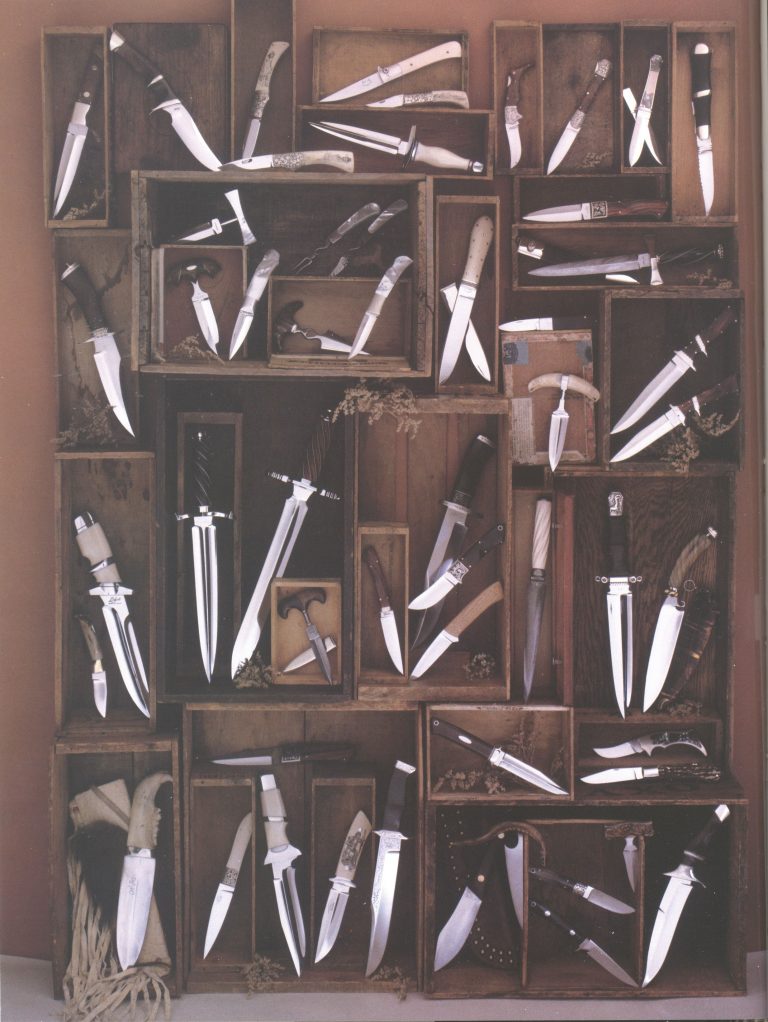 A collage of knife photographs from the late Jim Weyer

The Work of Jim Weyer Revisited

Jim Weyer, the “OG” of knife photography and member of the Cutlery Hall of Fame passed away this month. KNIFE Magazine Publisher Mark Zalesky reflected on Jim and his work in a prior post:

Pioneering knife photographer Jim Weyer passed away January 2, at the age of 87. A 1995 inductee into the Blade Cutlery Hall of Fame, Weyer singlehandedly raised the bar on knife images in the early 1980s with his meticulously composed photographs of handmade knives, taking the knife magazines and books by storm. In interviews, Weyer related that he viewed handmade knives as “sculptures in steel.” He strove to capture them on film in a way that allowed everyone to see the artistic expression in their blades and handles, and did so in a way that no one before him had ever done.

Under the name Weyer International, Jim and his wife Louise (who died in 2015) published five different collections of his knife photography under the title Knives: Points of Interest, as well as the first book on Loveless knives, entitled Living on the Edge, Legends of the Loveless Logo.

The Ohio-based Weyer retired from photography in the late 2000s, having bettered the custom knife community to an extent that few others have. Today, his work continues to serve as inspiration for the present generation of knife photographers.

Given the flexibility of the online format, we thought we would share some of Jim’s work, which was featured frequently and prominently on our print pages, especially our predecessor publication Knife World. As much of this was printed in black and white, and before modern digital photography, it is just a small sample of what has appeared over the years.

They say an artist gains immortality through their work, and Jim’s work was worthy of the ages.

As mentioned, this is just a small sampling of work from a man whose work continues to influence today.