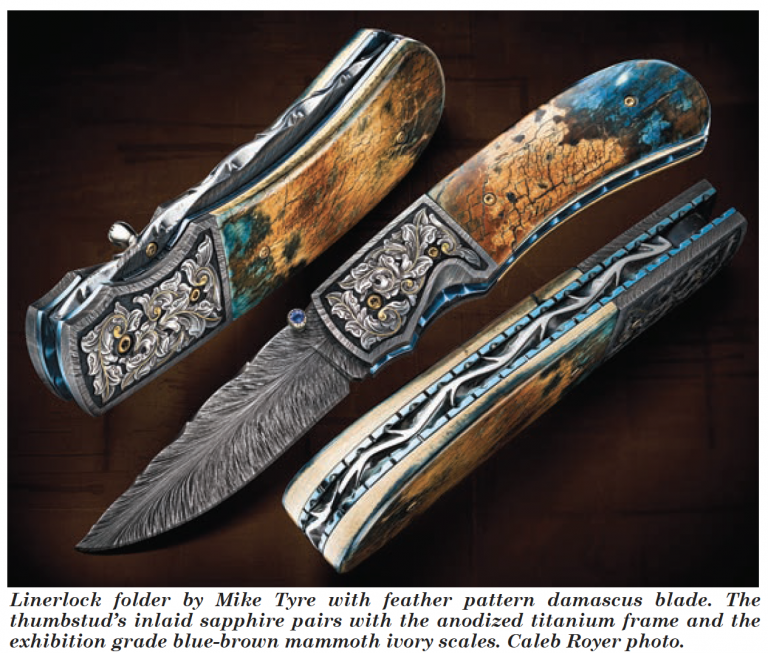 (Editor’s Note: Alongside the paywalled cover article, I am posting this first “Preview Post” with a longer excerpt from the article, giving our visiting readers a better taste of what they will get with a Premium Online Membership. It is just $19.95/yr ($9.97 for existing print subscribers) and gives one digital access to each new issue of KNIFE Magazine, 40+ years of Knife World (1975-2015) and KNIFE Magazine (2015-) archives, online access to the Goins’ Encyclopedia of Cutlery Markings, and much more -HCA.) 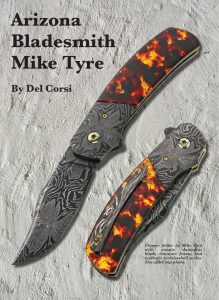 Bladesmith Mike Tyre (“ty-ree”) is a U.S. Army veteran, having served with the 101st Airborne Division for three tours in Vietnam. Returning home after his final tour, he attended the University of Wisconsin taking courses in sociology and psychology; he also had a passion for art, so he steered toward this as his major. One only has to look at some of the feather damascus Mike creates to know that the art major is working out very nicely. His patterns are among the finest I have ever seen!
The embellishment on both his fixed blade and folding knives is totally hand crafted by Mike, and the art knives he makes are mind-boggling.
One knife I saw on his website is called the “Riflemen Bowie.” This beauty is a great showcase for his skillset. The bowie features a 9-inch blade of forged W2 high carbon steel with a differential heat treatment (hard edge and spring tempered back spine) and a modified convex flat grind. The guard is an “S” pattern in twist damascus and includes a clam shell design hand filed by Tyre. The burlwood handle is strikingly framed in the same twist damascus as the guard, and the entire knife measures 13.75-inches overall. Handle pins of nickel silver are domed, completing a vintage looking bowie that looks as good as any of the great knives from history. The sole authorship work exhibited here is a feature sought after by knife collectors, highly prized in heirloom pieces like this bowie knife.
Tyre’s favorite steels are W2 and O1 for mono steel blades. When it comes to damascus his preference is a 10 series high carbon steel paired with 15N20, O1 or L6. At times he also uses powdered steels for mosaic damascus patterns. His shop equipment includes two Wuertz Machine Works TW-90 belt grinders, a digital temperature-controlled forge, digital controlled hydraulic press, a Say Mak air hammer, and several milling machines – plus an assortment of hammers along with the coveted anvil. “And a lot of sandpaper,” Mike added.
1995 was the year Tyre sold his first knife as a beginning knifemaker. He has come a long way since then, working up to earning his Journeyman Smith stamp from the American Bladesmith Society [ABS]. His interest in knives began early.As a young boy growing up on a farm who was always hunting and fishing, a knife was a regular part of life. Even then, Mike felt the tug to make things out of steel. This naturally led to making a knife. That first real custom knife was made from an auto body file, and the handle comes as no surprise – a deer antler! I asked if he still had that first knife. “No,” Mike replied, “It’s in my wife Birgit’s collection.” They have been happily married for 40 years.
Johnny Stout and Bill Ruple are two of the makers Tyre spent time with while learning to make knives. He pointed out that “Early on, D’Alton Holder helped me get started [but I] didn’t get to do any hands-on work with him. I did get to see what goes into making a good knife. My game really improved when Tim Hancock decided to show me how to build a correct knife.” Sadly, the knife community lost Master Smith Tim Hancock on July 11, 2019. This legendary bladesmith touched many lives, and was a great friend to Mike Tyre and scores of other knifemakers. 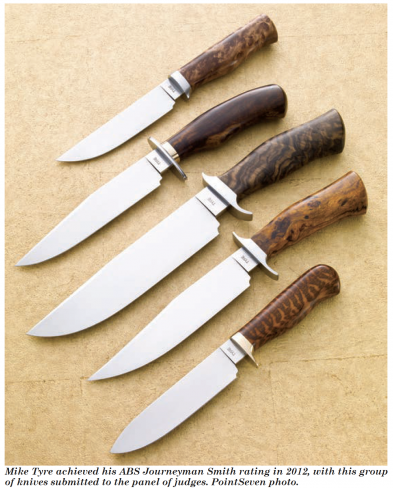 Our Premium Online Members can read the whole thing at the link below. Not yet a member? Click this link to become one today.