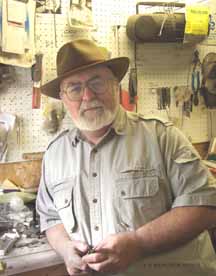 Knifemaker Butch Vallotton passes away at 77

It was announced this morning, that long time knifemaker Butch Vallotton has passed away at the age of 77.

Butch began making knives in 1984, but discovered his passion for custom autos a few years later.

He was a designer for several knife companies including Spyderco and Microtech. He was asked by Bill Harsey to help with a project for Col. Rex Applegate and together they came up with the Applegate-Fairbairn folder that Gerber Legendary Blades has been producing sense 1996.

Butch was the patriarch of a 3 generation knifemaking family, with daughter Ariana and son Rainy and grandsons Kyle, Cory, and Brandon following in his footsteps. The family/company website can be viewed here.

From our Knifemaker Database and Directory: