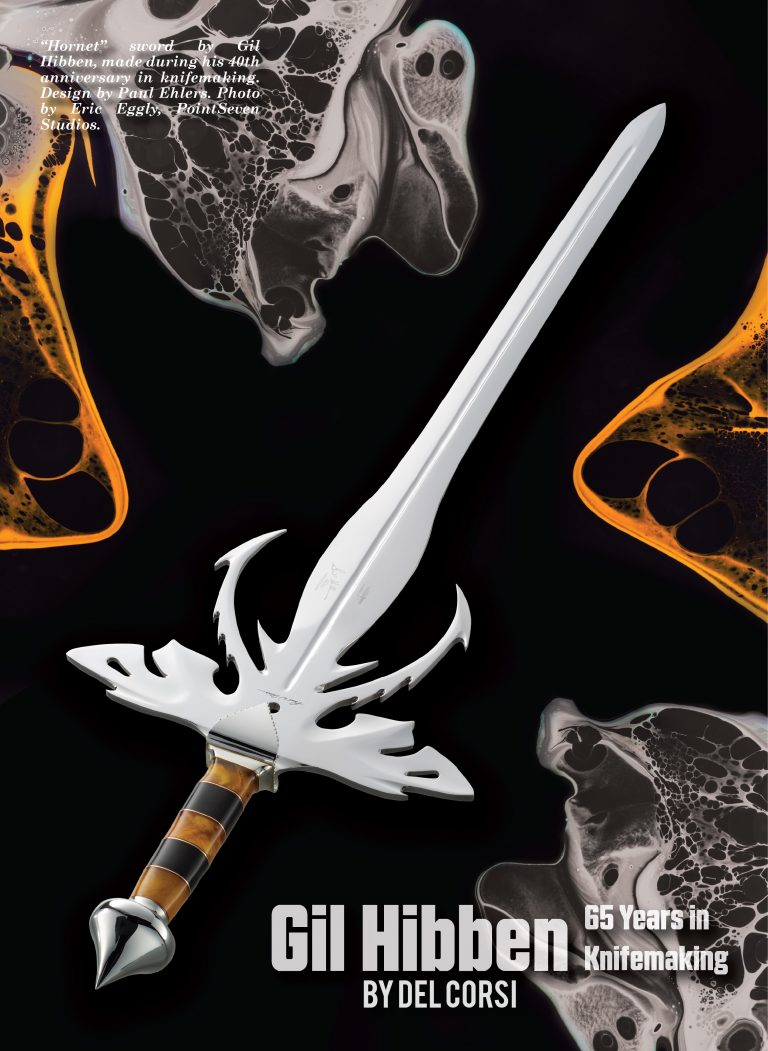 This is an extended free preview of our January 2022 cover article. Premium Online Members can read the whole thing here. Not an Online Premium Member? It is just $19.99/yr, or just $9.97/yr for existing print subscribers. Click here to sign up today.

Gil Hibben was born on September 4th, 1935. In 2022 he will celebrate his 65th anniversary as a knifemaker. In gearing up to talk to Gil and Linda Hibben about this fascinating man and his amazing career, a few butterflies began to congregate deep in my stomach. And who wouldn’t be a touch nervous talking to this iconic knifemaker? But the nerves and butterflies quickly dispersed. As a custom knifemaker myself, I absolutely relished the chance to learn more about Hibben and his knives!
Hibben has done just about everything a maker can do in his career, but he is probably best known for bringing to life the mind boggling blades designed by Paul Ehlers. My first question for Gil was also the most obvious, undoubtedly the most frequently asked question by both knife enthusiasts and knifemakers alike of Hibben: How on earth did you grind those Paul Ehlers designs?
For those unfamiliar with the extent of Gil’s knifemaking career, some history should probably come first before answering that question. The details and circumstances leading to those legendary fantasy knives, and so many other knives that Gil has also brought to life are extraordinary. I really need to start at the beginning!
As a boy Gil Hibben always loved knives, and he found himself continually drawing pictures of them. Seeing a movie called “The Iron Mistress” in 1952 starring Alan Ladd, he said, “Really sparked the fire of my passions, I just had to make a bowie knife after seeing the film.” That was the very first knife he ever made; it was crafted using O1 steel, then ground with a round stone grinder. Not many belt grinders back then! He still has the knife, although doesn’t like to show it saying, “It is so crude, but I still cherish it, a great reminder of my humble beginning of being self-taught.” His second knife went to his father, it is still with the family. 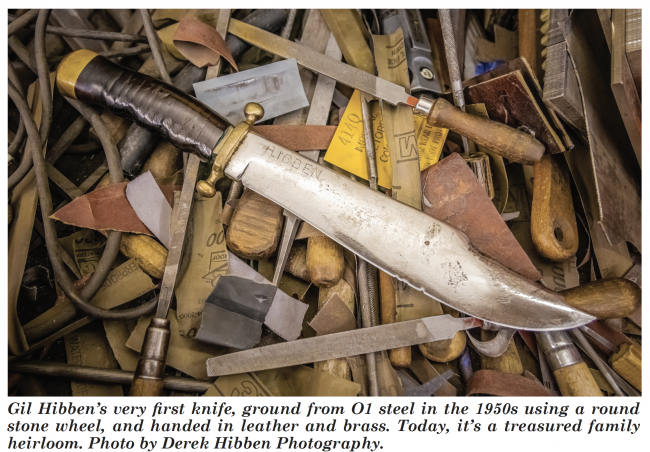 So many knifemakers have come through the Hibben shop that it would be impossible to mention them all. Instead of leaving some out, I just contacted one of the greats who is a lifelong friend, namely legendary knifemaker Steve ‘SRJ’ Johnson. Steve fondly remembers being in high school when Gil moved to Manti, Utah, opening up a knife shop. Hearing Johnson speak about those early days was fascinating; “Talk around town was that Gil was selling knives for about forty-five dollars. This was around 1965-66 and you could buy a knife at the hardware store for seven dollars, everyone thought he was nuts.” Gil just happened to attend the same church Steve went to, and they asked him to be the Explorer Scout Advisor. One of the program activities was bringing the youth to a local business to explore different occupations. They would visit the banker, lawyer, barber, etc. “Gil took us out to see his occupation. I knew that night I was going to earn forty-five dollars. Somehow, I was getting one of those knives! Then Gil let each of us make a knife in his shop. Only two of the knives were finished, mine and another friend who needed my help to finish his.”
“Gil could tell I was enchanted with knifemaking, I didn’t want to do anything else but that,” he said. When that first knife was completed, Steve slept with it on his nightstand by the bed. He was in love with that knife and custom knives in general. He mentioned that Gil was “Really good to us kids.” Gil offered Steve a job after school and on weekends, and by the second year of working, Steve’s dad let him “Not work on the farm at all that summer.” The job with Hibben lasted about two more years, they became close friends and had many adventures hunting in Hibben’s Willys Jeep. “We still have a special bond that nothing can break,” commented Gil. One of Steve’s favorite adventures with Hibben was riding motorcycles from Manti to Long Beach, California for the National Karate Championships. Gil rode a Honda 360 and Steve rode a Honda 160 Trail bike! A couple of “Iron Butts” as those of us in the motorcycle world call these long rides, never mind on small bikes like those! 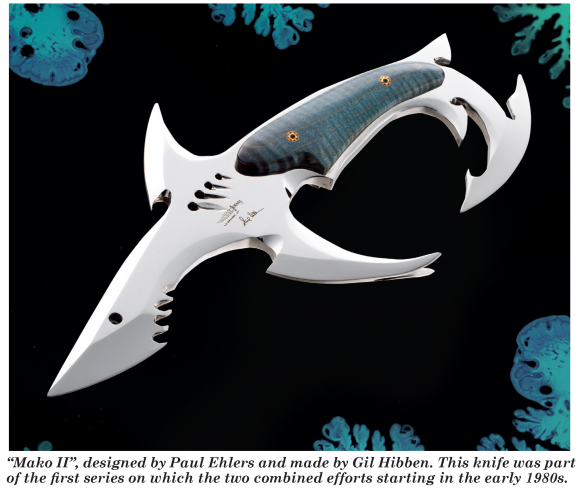 Detailing Hibben’s journey after leaving Manti would fill more than a few large books, so for now I’ll just touch on a few select chapters. It may surprise some folks to learn that Gil is an accomplished singer; he sang in the Mormon Tabernacle Choir years ago, and was also a member of the international award-winning barber shop chorus “The Thoroughbreds.” Gil served with the United States Navy, and worked as a machinist for Boeing Aircraft prior to moving to Utah. He is also a licensed ham radio operator. However, his greatest proficiency – turning raw steel into spectacular works of art – is what really made the “Hibben” name a household word.