Editor’s Note: Alex Eastland is a high school student and aspiring writer. He is also the son of “Dogwood Dan” Eastland. Together with his dad and brother, he traveled to Colombia with Joe Flowers of Bushcraft Global. We have offered him these pages to report on his experience on this previous trip, and look forward to more posts from Alex in the future – including a planned return trip to the Amazon.

Don’t Be Stupid: The Jungle Mentality
By Alex Eastland

The Amazon jungle can most aptly be described as a beautiful danger. Like the vibrant poison dart frogs that inhabit it, the Amazon is visually breathtaking. At 12, peeking out the window seat next to my father and 14 year old brother, Jack, I found myself staring off into the distance at a scene resembling a Windows background screen, encapsulated in lush green beauty. The green-tinged aesthetic of the jungle serves as the backdrop to stunning flora and fauna. Whipping out my iPhone 5 and shooting a blurry photo of the canopy from my plane window made me feel like a National Geographic photographer, capturing the immense lively beauty of the rain forest, simply because the region is simply that awe-inspiring.

Seeping deeper between the green flesh of the Amazonian canopy, however, is the harsh reality of the rain forest. Believe it or not, it’s dangerous. Like the aforementioned poison dart frogs, the jungle leaves you both in awe of its physical beauty, as well as just one wrong move away from death. Once arriving in Leticia, Colombia, were greeted by a friend of my dad, Goran Mihajlovic. Goran, later accompanied by the head guide of Goran’s Tanimboca reserve, Alberto, lead us through Leticia, as well as the bush, and probably, unbeknownst to us, saved our lives on numerous occasions. Throughout the expedition, there were countless opportunities for Goran to swoop in and prevent my 12 year old mind from putting my 12 year old body in danger. You would imagine that, in order to protect two young, naïve, inexperienced, Americans like my brother and me, there would be a long list of rules to follow in the jungle. The debriefing preceding the first hike in, however, did not include a long list of plants to avoid, things not to touch, or strategies to not get eaten alive by a carnivorous plant. Rather, Goran placed down just one rule, the first rule of the jungle: Don’t be stupid. Everything in the jungle is capable of killing you and the very minute you let stupidity take control is the minute you leave yourself vulnerable to those dangers. 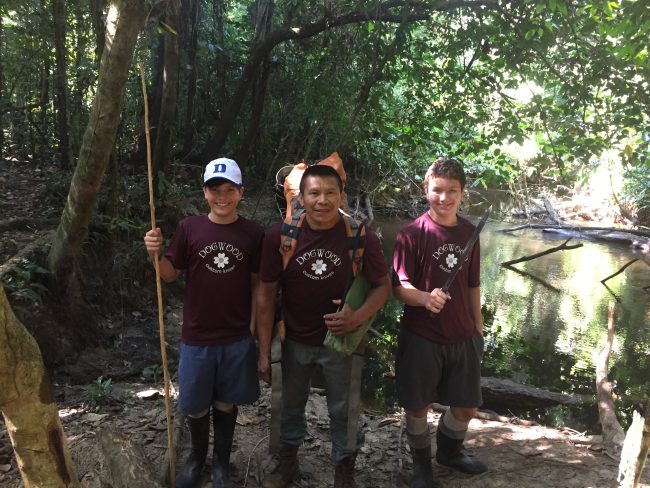 Throughout the trip, carelessness was likely the most common vehicle of stupidity. It’s not easy to go from suburban American life to an environment where you must stay cautious of everything at all times, but that’s the reality of the Amazon. Letting your guard down for a second (something as simple as not checking where you’re sitting or not looking at the branch you’re grabbing) could result in death. A running project throughout the expedition was crafting backpacks out of vines found in the jungle. The backpack, though incredibly simplistic in comparison to the REI packs we hiked in with, still sits in my bedroom as a memento of the trip. Each time I look at it, I’m immediately reminded not of the unforgettable hikes and views of the Amazonian canopy, but rather of the irritating crafting process, compounded by my own carelessness. The construction of the backpacks started with a short hike into the rainforest to collect the vines needed to make the backpack. Once we had cut down the vines (with no issues), we had to strip the vines of their skin, to make them flexible and able to be weaved. Goran and Alberto warned of the sap inside the vine, a mild skin irritant.

For the first 5 minutes, I heeded by this advice very carefully, making sure to make as little contact with the sap as possible. But, as you can imagine, I quickly lost all focus towards my own well-being and found my fingers covered in the sap. This wouldn’t have been a concern if I hadn’t been swatting mosquitos off me. Next thing I knew, I started getting a mild burning sensation on random spots around my skin. After a few minutes of itching at my back and shoulders, I complained to my dad about it. He laughed, looked at Goran, shrugged his shoulders, and rhetorically asked, “What’s the first rule of the Jungle?” Ultimately, it was a minor mistake, and a quick shower got the sap off of me with no major problems. But the sap was irritating nonetheless and served as an annoying physical reminder of the consequences of stupidity in such a dangerous place.

Stupidity also creeped into my mind disguised as confidence. Once we had trekked several miles, I began to feel better and better about my hiking abilities. Guided by Goran and Alberto, the hikes seemed to become easier by the minute, and I had convinced myself that I was some sort of expert by this point. Crossing streams, walking over logs, and ducking under branches made me feel like a professional wilderness journalist venturing through the bush of the Amazon. As we approached a dried, but still muddy creek, I saw this as another opportunity to show off my newly obtained jungle skills. Laying perpendicular to the creek was a narrow fallen tree, which Goran instructed us to carefully cross. As I watched my brother and dad slowly but surely make their way across the creek, I felt my inner American Ninja Warrior kick in. I raced across the tree and felt incredibly confident for about 2.5 seconds. About halfway across the tree, my foot slipped and I found myself boot deep in mud. Alberto chuckled, as Goran helped me out of the creek. My confidence in my hiking ability was a complete roller coaster during the expedition. As soon as I reached a certain level of cockiness, I found myself tripping over roots, rolling my ankle, or, of course, falling into knee deep mud. After that, my pace would slow, I would stare at the ground, and I would slowly, cautiously hike. In between my over-confident and under-confident states was a perfect medium, where I was both humble and efficient, able to walk at a fast pace, while not tempting fate.

Of the countless stories I have about the Amazon, it’s the ones where my stupidity got the best of me that stick with me the most. The mantra of “Don’t Be Stupid” applies especially to a place as obviously dangerous as the Amazon. But, in the 3 years since the trip, “don’t be stupid” has become an aphorism that has often found its way into my post-jungle life. Leaving the house, my dad makes a habit of reminding me to keep the First Rule of the jungle in mind and to always stay on my toes. On the football field, when I feel myself getting too confident in myself (or not enough), I search for that healthy medium I had found in the Amazon. While not on the same scale as the dangers of the Amazon, the “normal” world is still a scary place. Anyone who watches the nightly news knows that. But, by adopting an anti-stupidity jungle mentality, danger can be avoided or at least suppressed. As Dwight Schrute (played by Rainn Wilson) once said on The Office, “Whenever I’m about to do something, I think, ‘Would an idiot do that?’ And if they would, I do not do that thing.”

You can win a knife by Dogwood Dan, click below to find out more:

Win this Dogwood Custom Knife by Dan Eastland. Inquire Within…