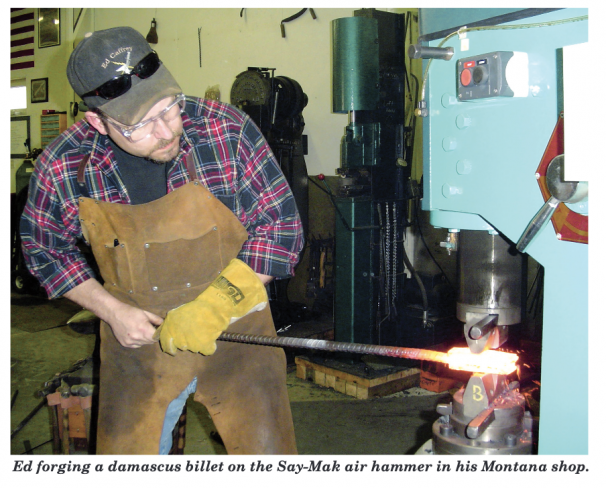 This is an extended free preview of James Takenaka’s article from the May 2022 issue of KNIFE Magazine. Premium Online Members can read the whole thing here. Not an Online Premium Member? It is just $19.99/yr, or just $9.97/yr for existing print subscribers. Click here to sign up today.

Ed Caffrey was the first master bladesmith I ever met. Years ago, when I first had the pleasure of watching him at work, it was not in his shop in Great Falls, Montana, but on an acreage just outside the small town of Tilley in Alberta, Canada. Ed is a friend of Canadian knifemaker Jim Clow who invited him up to a summer hammer-in he used to host in June.
It wasn’t until I arrived at the hammer-in that someone told me Ed Caffrey was demonstrating how he made damascus. I was shocked! I had no idea Ed was going to be there. To say I was somewhat in awe of Ed Caffrey is an understatement. I had long been an admirer of Ed’s knives and in particular, those that sported his stunning handcrafted damascus blades. I would often hop onto his website just to admire the new creations he would post.
I pushed through the crowd of knifemakers and sure enough, Ed was drawing out a yellow-hot billet of 15N20 and 1084. I watched mesmerized with the rest of the knifemakers as he moved back and forth between a forge and a hydraulic press. Anyone familiar with Ed Caffrey’s work knows that he is a virtuoso when it comes to creating damascus. At the time I was too intimidated to introduce myself, so I was delightfully surprised when he walked up to me, stuck out his hand, and said, “Hi! I’m Ed.”
And that was how I first met Ed Caffrey, the Montana Bladesmith. It wasn’t long before I was peppering him with questions about his knives, his damascus, and his background as a knifemaker. He graciously indulged me with all my novice questions and made sure to make eye contact with me during several of his demonstrations.
That was back in 2011. 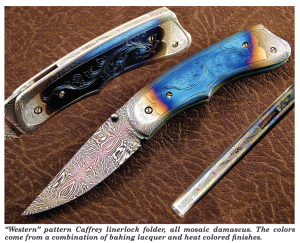 Ed Caffrey made several trips up to Canada to be a part of those hammer-ins, demonstrating techniques and mentoring us novice makers with a gentle patience. During one of those hammer-ins he gifted me an exquisite damascus pen he had made. It’s not a knife, but it’s a treasured Caffrey keepsake that I pull out and show off whenever I can ambush one of my friends.
Recently, I had the opportunity to reconnect with Ed Caffrey and he graciously allowed me to delve into his past. “I was born on March 15, 1963 and grew up a farm kid in Corydon, Indiana. We had about five hundred acres which was a really big farm back there. I found out when I moved out to Montana, that was pretty much a garden plot out here.”
He recalls that as a young boy he and his best friend were putting up hay to make enough money to buy themselves knives. Eventually, with newly bought production knives, they went to work skinning a beaver. “I ended up having to sharpen that knife about four or five times before I got the job done.” It proved to be a little frustrating. That’s when Ed decided to try to fashion his own knife hoping to make the task a bit more efficient.
“I’m almost embarrassed to show this to you,” he says with a grin, holding up a wide-bladed knife for inspection. “It’s made from an old power hacksaw blade,” he says. The blade is thin, about seven inches long, and has a heavy-duty looking handle. “The scales are pieces of tire.” Again, the grin. But that crude home made knife did a better job than the factory made knife and Ed has kept it with him wherever he’s moved.
At eighteen Ed joined the United States Air Force and, at nineteen, he married his wife Cindy. He chuckles when he says, “I went into the military because I knew my family would be cared for if I was sick, lame or lazy.” 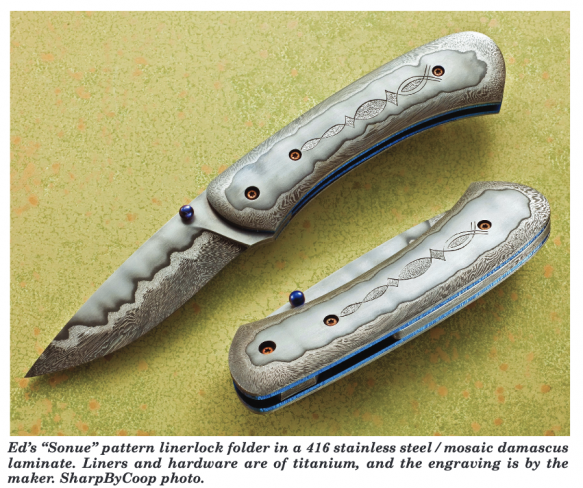 The last seven years of Ed’s military career were spent as a superintendent in a heavy equipment shop with a unit called Red Horse. He relates a time when he and his crew landed in Qatar and began a construction project in the desert. Where once there was only endless sand, after eighteen months, there was a fully functional runway and twenty-three buildings.
Caffrey remains politely aloof and reticent about the earlier years of his military life saying that that part is still considered classified. He does, however, reference Desert Storm as part of his adventures. Intriguing and mysterious, but I take the hint and don’t push further.
It was while he was in the military that Ed began making knives on a part-time basis. It was, occasionally, a painful learning curve. “I had several instances of going to the emergency room for staples and stitches,” he says. While he never really did any serious damage to himself, his commanding officer got fed up with the frequency of Ed’s visits to the emergency room. “The colonel who I worked for told me the next time I showed up for stitches he was going to give me a written order to cease knifemaking. And he could have done it, too.”
It wasn’t until Ed discovered the American Bladesmith Society and saw some of the knives produced by mastersmiths that a renewed inspiration took hold of him. “I got a brake drum from an old Ford pickup truck, welded some legs onto it, and stuck a piece of pipe in it with a pistol hair dryer. Then I made some charcoal out of old pallets from the local grocery store. That was my first forge. And my first shop was actually a picnic table in the back yard,” he laughs. Ah yes, humble beginnings on the road to greatness!
Earlier, he tried his hand at farrier work, but he found that shoeing horses didn’t really hold that much appeal. “But I liked the idea of hammering hot steel,” he says.
Ed formally joined the ABS in 1988. Six years later, in 1994, he earned his journeyman’s stamp and six years after that he was awarded his Mastersmith rating in 2000. 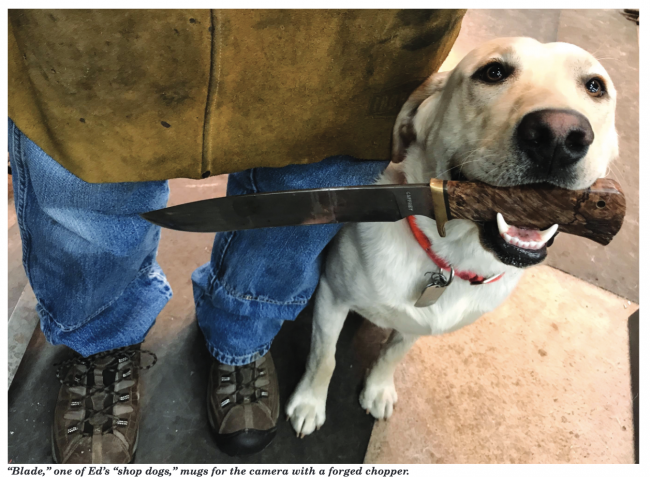 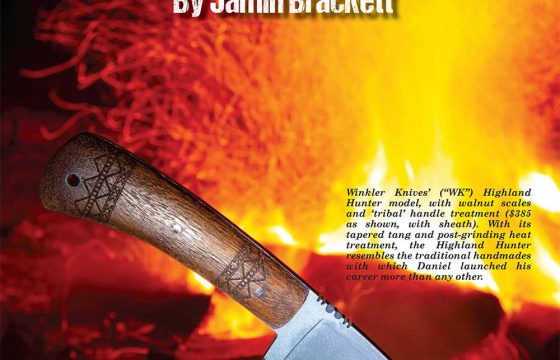 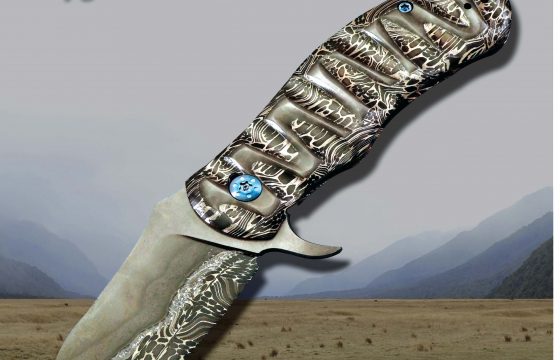 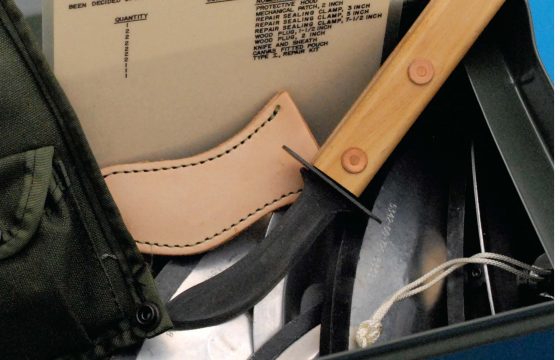 The Bladder Knife By Frank Trzaska