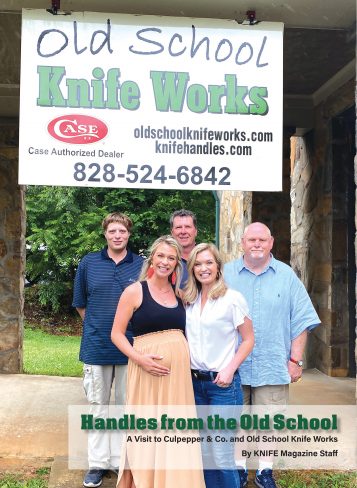 Handles from the Old School
by H. Clay Aalders

Just a short hop over the mountain from the KNIFE Magazine offices in Knoxville lies the town of Otto, North Carolina, home of Culpepper and Co. and Old School Knife Works. Culpepper is a 3rd generation company specializing in dyed bone, mother of pearl, stag and antler. They also operate Old School Knife Works, a retail knife shop which just so happens to be located in an actual “old school” – the former Otto School (pronounced “OTT-toe”), which was in operation from 1941-2001.
Culpepper was founded in 1976 as D.A. Culpepper Co. by David A. Culpepper, father of Joe, who together with wife Kristi own and operate the company today. Their daughter Ashleigh has grown up around the business, and today heads their online sales and social media efforts. It is worth noting that the Culpepper website (www.knifehandles.com) credits KNIFE Magazine Editor at Large J. Bruce Voyles as one who helped introduce David to the industry and to legends such as Jim Parker, Jim Frost, and Bob Loveless.
“In the mid-‘70s my dad was a custom knifemaker, and long story short, he started using exotic materials, using some ivory and abalone, and before too long he’d go to these little shows and other makers would say ‘Hey, I’d like to make a knife out of that material.’ Not long after that he quit making knives and just started cutting handle material. It started in his basement and I think the first warehouse was around 1982.”
They moved into their current 20,000 sq. ft. facility, the above mentioned Otto School, in 2007. Purchased at municipal auction and despite needing extensive renovation to suit their needs, Joe feels that they “got it for a steal.” It was pre-wired for 220 volts and had a commercial cafeteria kitchen which today serves as their dye-room. Joe’s office is the Principal’s Office, and many other rooms show telltale signs of their former use. In fact, the floor of their largest storeroom still bears the basketball lines from its days as the gymnasium and auditorium.
The modular nature of the building allowed them to open up new areas as the business expanded, though Joe says that pretty much the whole building is now occupied in some manner. The most notable expansion was Kristi Culpepper’s brainchild, the Old School Knife Works retail knife store. Occupying around 6000 square feet of the facility, it carries a range of production knives from all of the expected companies, vintage pocketknives, some customs, Old School Knife Works merchandise, and even dog chews from antler offcuts.

This article appears in the September 2021 issue of KNIFE Magazine. You can read the whole thing by clicking the blue button below. 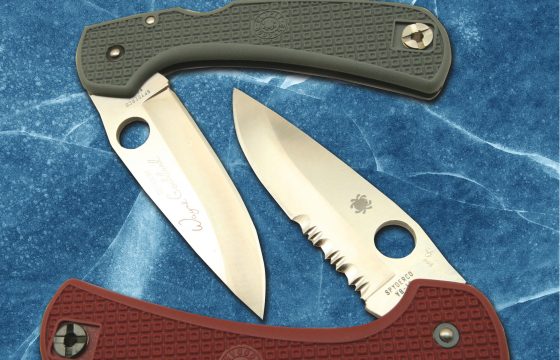 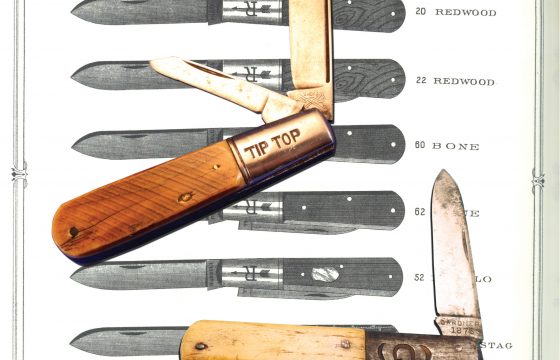