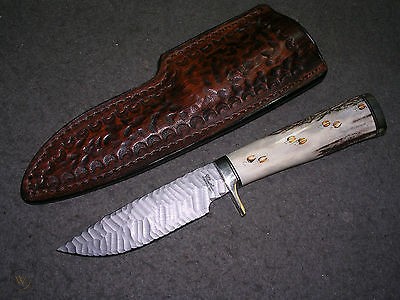 Knifemaker William “Bill” Cheatham, creator of the “Chipped Flint” grind, has passed away.

Bill Cheatham, creator of the “chipped flint” grind, has passed away. His knifemaking career spanned more than 40 years, but he will be most remembered for his unique finish style which replicated the concoidal fracture pattern of a knapped stone knife. 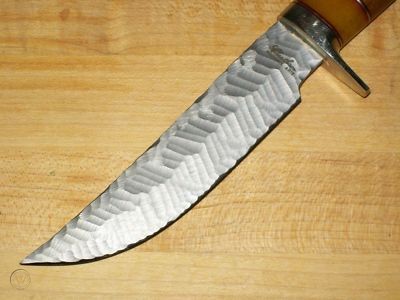 This patterning was adopted by fellow Arizonan David Yellowhorse and other makers, as well as on several production models from Buck Knives.

Laveen – William (Bill) Dee Cheatham, born August 5, 1936 in Pawhuska, Oklahoma. Returned to Laveen, AZ at age 2 to live on the family dairy and cotton farm. He attended Phoenix Union High and went on to attend and graduate from ASU with a business degree. During this time he met and married Patricia (Patty) Cooper and they had their first two children Cynthia and David. After graduation he worked in sales for a number of companies until he decided to follow his passion and joined the Phoenix Police Department in 1964. His career ended after 25 ½ years when he was shot in the line of duty although he was able to end the threat and as a result was awarded the medal of valor and the police shield. In 1965 he and Patty accepted Christ as their personal savior during a home visit by Dr. Mitchell of Bethany Bible Church. He was an active member there as a Jr. High youth leader and a Boy’s Brigade leader. In 1975 he decided to become a custom knife maker. He sold his first knife a year later at the Kansas City Guild show. He continued to make knives until medical conditions prevented his continuation in 2015. During his knife making years he designed and invented a look known as chip flint. He also designed the first successful gut-hook folder. His knife making allowed him to send two of his children to Christian high schools and college. Along with knife making, his other great interest was in firearms and shooting. From casting his own bullets to competing in various shooting competitions, collecting and shooting never was far from his mind as he was designing holsters until the very end. He also enjoyed driving classic Falcon’s wearing the Blackwatch tartan and spending any time he could on a beach. All of these interest though were always a distant second to his love for his family. He embodied the idea of a servant as he did whatever was necessary to ensure that they had whatever they needed. His favorite quote was from Sir Winston Churchill – “Never, never give up.” This concept was evident in the numerous surgeries and therapies that he endured after being shot and later after suffering a series of strokes. He never gave up the idea and the battle to walk again. He is survived by his wife of 62 years and their three children Cynthia and her husband Harry, David and his wife Laura, and Stephanie and her husband Chris. He is also survived by 9 grandchildren and 8 great-grandchildren. Bill was preceded in death by his parents, Ernie and Adele Cheatham. His brother Earnest (Buddy) Cheatham Jr. and his infant daughter Elizabeth.

From our Worldwide Knifemaker Database and Directory: